Catering for a Private View 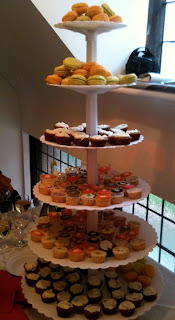 My embroidery group have their first group exhibition on at the moment, so I insisted on catering for the Private View.  I made carrot muffins, vanilla cupcakes, macarons and mini quiche. As I used a mini muffin tin for everything except the macarons, each item was one or two bites. The quiche are on two separate trays.  They were flavoured with roasted peppers, Parmesan and brie, and basil pesto with pine kernels.

I realised doing this that, though I make the carrot muffins regularly I haven't put the recipe on the blog as I devised the recipe before I started keeping records this way.  I'll put the recipe and method on later.

Of course I over-catered.  We had invited sixty people but only about thirty turned up.  This is usual, but it would be shame to have the food run out.  I had gone prepared with little food-grade paper bags so I could send people home with cakes.

This would certainly be sufficient for sixty people.
Posted by Lois Parker at 09:22