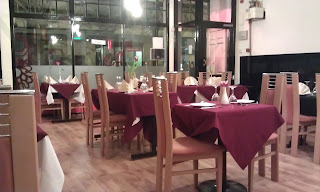 Just ate at an Indian restaurant in Worcester, Karma, on Broad St.  Each dish had real flavour, distinct textures and aromas.  The restaurant was clean and spacious, the music discrete, and the service attentive without being intrusive

The process was amazing.  I mentioned I had a gluten intolerance and needed to avoid flour.  The waiter didn't know what a gluten intolerance was, but said he would make sure things were fine.  Pappadums we had hadn't ordered arrived.  I explained they sometimes had wheat flour in.  He went and checked, and then, without asking, fetched the package for me to read the label.  I asked about the fat they fried them in - they have a separate fryer for pappadums.

The pickles and other accompaniments were good, and the lime pickle the best we remember tasting.

When the curries came the waiter made a point of putting Rod's nan on his side of the table well away from me.  I didn't have to make the point.  He did say, before he handed me the rice I had ordered, 'is rice all right?' so I did explain it was wheat, rye, barley and oats.

Three hours later and I have no sign of any ill effects.  We will definitely be eating there again.