Guests to tea and no baking 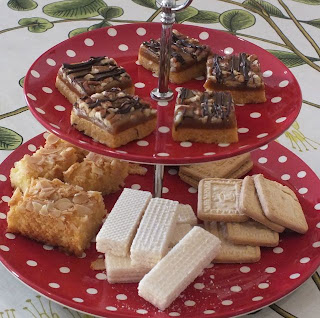 I have been trying to give up my obsession with baking.  Doesn't feel the same in my tiny new kitchen and there isn't anywhere to freeze supplies if I bake in bulk.

I was having visitors yesterday afternoon and bought baked goods from M&S and my local speciality foods (allergy etc) store.   I was astonished that two of the biscuits from different manufacturers looked identical except for the colour (one was coffee flavoured) but was told this was perfectly normal.  I thought it suggested a single maker and branding - not that I object, was just surprised.

I was never much of a fan of ordinary shop-bought biscuits, especially after one Christmas where we went skiing in a hurry and left some foods on the table, coming back to find that the mice had managed to get up onto what we thought was a mouse proof zone, and had eaten all the biscuits that were like home made ones and the open tin of standard biscuits hadn't been touched,  I figure if mice think biscuits aren't food that is sufficient information for me to stay away. 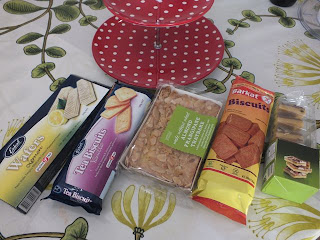 A quick trip to M&S and I came away with an almond frangipan cake and some pecan, chocolate and caramel shortbread type biscuits made with cornmeal.  The frangipan good, moist and held together adequately, and had no odd ingredients.  The shortbread was gritty, as things made with cornmeal often are.  I do use cornmeal in a mix with other ingredients, but do find it difficult to find fine-milled cornmeal rather than course ground.  The general view was the topping was good but the grittiness was unpleasant.  I found the topping too sweet.  I would be happy to buy both of these in the future.

The biscuits were plain and coffee flavoured simple biscuits - the kind I think of as dull.  They were boring in flavour and texture, and they went to a slightly claggy paste in the mouth.  My gluten eater who gave me feedback said they were ok.  I suspect for people who want a biscuit with a cup of milky sweet tea they would be fine.

The lemon wafers were astonishing.  My gluten eater who gave me feedback said they seemed like a fishy lemon flavour.  I didn't notice the fishiness, but the lemon oil flavour was overwhelming.  I have bottles of oils for use in massage and these wafers were exactly like neat lemon oil which I sometimes use as a room scent if I need to concentrate.  So - too much like a floor cleaner is probably the easiest way to think of them. The texture was very entertaining, crisp then melted.  If your mouth is yearning for a wafer these will be a good purchase.

The weird flavours and textures didn't stop me munching quite a few of these over the course of the afternoon and evening.

So, a whole bit of text about food that I haven't made myself in my gf kitchen and so far no mention of guts.  Too late.  Spent a good chunk of the night on the loo, and feeling a bit ropey this morning,  No idea what caused the problem as these foods didn't have anything I know causes trouble, especially in small quantities.  I haven't been glutened as I don't have the fever and rash and all the other symptoms.  Perhaps I am just suffering from greed.

The amazing thing about this offering of cakes and biscuits is that it was possible, and I didn't even buy some of everything available.  There is now a choice of gf treat food available from normal high street stores, the packaging looks as if the manufacturers think of it as food and not DIY products, and the quality is acceptable.  If I had given up gluten recently rather than several years ago I would probably never have spent those hundreds of hours searching for an acceptable way to make baked goods.  I still think my flour mix is superior to the others available, and I still regret the industries liberal use of gums to provide cohesion, but things have come a long way.

.....
the weird lemony wafers give me gut ache so won't be buying them again.  The other biscuits are just too uninteresting to be worth the house space...but if you don't like baking you could at least use them as the base for a cheesecake or make that muddled up thing with chocolate and marshmallows.  The cakes were the best of the lot.
Posted by Lois Parker at 12:27