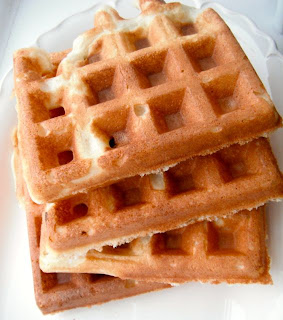 I fancied waffles for breakfast rather than our usual american pancakes.  It is almost the same mixture, but I beat the egg white to a stiff froth before stirring it in to the wet mixture.  The hard part about making waffles now is clambering into the roof-space cupboard to get the waffle baker, as the kitchen is too small to store intermittently used kit.

These waffles are light without being insubstantial, crisp on the outside and soft in the middle.  They freeze well so you can make a batch and have a few whenever you want.  If you have a toaster they can just be popped in frozen and come out ready to eat.

Prepare your waffle baker.  Set to a middle temperature setting.

Mix the dry ingredients together. Mix the egg yolk, milk and oil together.

Beat the egg white until stiff.

Fold the egg whites into batter.

Scoop the batter onto the baker, filling from the middle.  I find it better to have waffles that don't quite reach the edge than barge their way messily down the outside of the baker.

I found this mixture made one complete set of four waffles with a little left over.  Cook until golden brown and crisp.  Cool on a baking rack or send straight to plates.