Today our electricity has been off as the power company were cutting down trees.  As I had made a large loaf of bread yesterday we got an ancient sandwich toaster designed to be used on a stove, rather than with electricity, out of a barn it has been sitting in for at least a decade.  We are very poor at getting rid of things - and fifteen years after we last used this, hey presto!  it is useful again.

As I had made the loaf using the high sided pullman tin the bread nearly filled the cavity of the toaster.  The bread was buttered before putting it into the toaster and it was filled with mature cheddar.  We then put it directly into the stove, resting it on the glowing wood. 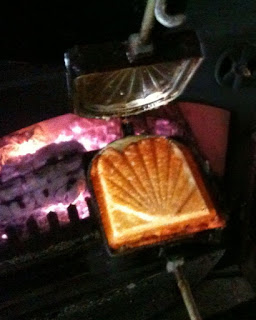 A short time later and we had an excellent crunchy tasted sandwich.  This may not seem anything exciting for normal consumers, but if you manage without gluten a scrumptious toasted cheese sandwich is an amazing thing. 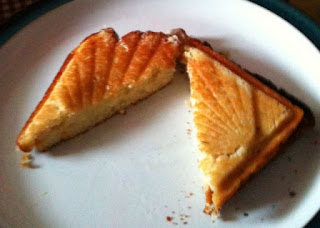