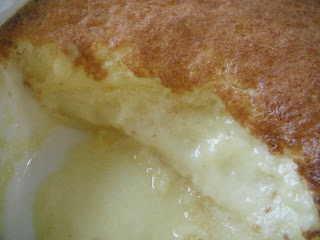 Years ago I had a pudding which was cake on top and lemony sauce underneath.  I had a go at the recipe, using  a recipe from UKTV as a start.  The BBC recipe needed more lemons than I had, and I thought it would be possible to test the structural qualities of the cake with the first recipe.

55g butter, softened
115g sugar
zest and juice of one lemon - I would definitely use at least two next time as very mild flavour
2 large eggs, separated
65g flour (recipe called for 55 but the mix was so sloppy I added 10g)
1 tsp baking powder
285g milk

Place in a buttered dish and bake in a 180C (fan) oven for 40mins.  Place the dish into a roasting pan and half fill with water to produce a gentler cooking environment.

This produced a pleasant, mildly lemon-flavoured, soft fluffy pudding.  It didn't really produce the separate sauce at the bottom that I remember.  I'll have to try it with less flour even though the batter looks as if it would never make a cake of any sort!  Two lemons with the same amount of the other ingredients may well be sufficient to give a zingy flavour.