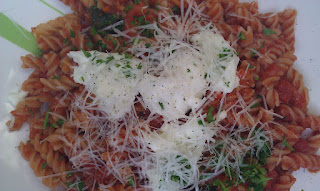 I noticed on a Facebook page a conversation about ASK Pizza offering gluten free pasta.  There was an interesting second post saying that they asked for gf food and were only allowed to have the pasta- not a salad or other naturally gf option.

Nonetheless, passing an ASK restaurant this afternoon I went in to try their pasta.  I have a few days where being ill wouldn't be very inconvenient, so had a four o'clock, no one else in the place, meal. 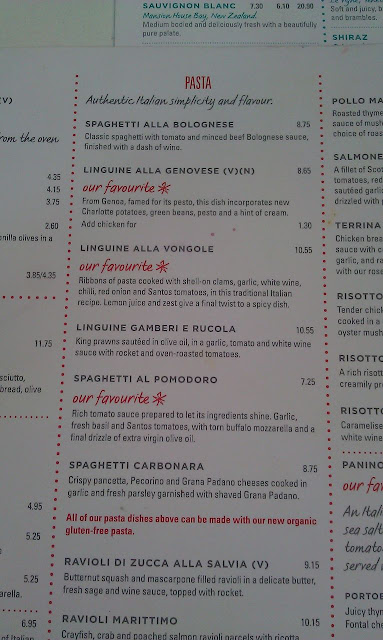 TT had an excellent pizza.  I had pasta with a tomato sauce with what I think was parsley rather than basil, can that be right? and some halved mini tomatoes and mozzarella.  They had said the pasta was made with rice, and was organic.  I spoke to the chef to say that even minor contact with hands that had touched dough would cause me problems, and she said she would wash her hands after preparing the pizza.  With no one else in the place this was an easy conversation to have, and the likelihood of cross contamination must have been lower than at peak times.

The pasta was that twirly variety - I forget the name.  I don't buy it myself much as I find the texture a bit hard and obtrusive.  The tomato sauce was OK, but I felt a bit as if I was eating mass-produced kids food.  The extras, which might have added some textural interest, were only enough to lift about a quarter of the pasta at the most.  I took a lactase pill with the pasta to help cope with the mozzarella.

I am impressed that they have taken the trouble to stock and offer gf pasta.  It is just a shame that they couldn't have sources something which lift the meal from 'at least I can eat something' to ' how lovely to have a great meal'.  I shall write to them and suggest they try the tagliatelle by La Veniziane, which is excellent and would go well with the sauces they have - it would also be very likely to be better than the pasta people serve themselves at home as it isn't readily available in ordinary shops. It is available from Lavida Food.

Two hours after eating - no ill effects.  Of course I won't be sure until tomorrow, but it looks as if, in these conditions ASK pizza is a safe place to eat.