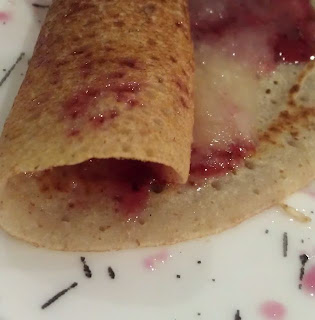 It is a while since I had buckwheat pancakes so I checked the recipes available.  Most suggest wheat flour with a quarter or so buckwheat.  I presume people do this to moderate the distinctive flavour of buckwheat.   I made these pancakes with plain buckwheat flour, which despite its name has nothing to do with the wheat family and is naturally gluten free.  I also skipped the large amount of melted butter some recipes called for, using a little vegetable oil, and substituted dairy milk for rice milk, making these dairy/lactose free as well. 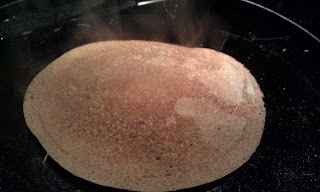 I ate mine with homemade apple sauce and grape jelly.  Rod ate his with grated Gruyere and pepperoni, folded and left on the pan to melt the cheese. 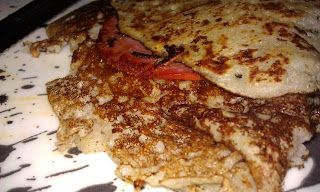 These were delicious and simple to make.  We used the traditional wooden tools bought decades ago on holiday in Brittany, but you can spread the batter with the back of a spoon, and turn using a spatula.  Our flat crepe pan, used for nearly thirty years, is made of aluminium so won't work on the induction hob in the new flat.  We used our old cast iron griddle, which worked a little less well as edges are a bit roughened by use for many different forms of bread and pancakes over the years.  An ordinary frying pan would be fine. 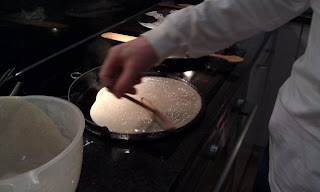 For two people - as a main meal, or four as desert

200g buckwheat flour
1 egg
1 tbsp oil
400ml rice or other milk.  This is two of the small cartons I keep in the pantry.

Mix all the ingredients together and let it rest for a while.  The recipe I was basing this on said an hour but I used my batter after ten minutes.

Heat a pan, lightly grease and pour a small amount of batter and spread it out.  You could also increase the liquid to a pouring, swirling consistency and just tip the pan to spread.

Cook on a medium heat until browned on the first side, then turn and cook on the second.  Stack and keep warm or eat as they come off the stove.  If you make too many wrap and keep in the freezer.  They can be microwaved quickly and used as wanted.