I looked at several recipes for salmon with a pinekernal crust.  Many included breadcrumbs, some included flour, and some just had smashed pinekernals with added flavourings.  I tried a plain version with no extra flour or breadcrumbs.  It was very simple to make, and produced a juicy crust, slightly chewy next to the salmon and crisp on the toasted edge.

I used a single fillet of frozen wild Alaskan salmon, microwaved for 1.5 minutes so it was about three quarters cooked.  A handful of pinekernals were blitzed in a blender, with the lime zest from about half a lime, some hot and herby pizza oil ( about a teaspoon) and some fresh thyme leaves.  I moulded this with my hands onto one surface of the salmon fillet, having first removed the skin.  It would have been easier perhaps to cook this under a hot grill on a piece of foil, but I just placed it very carefully pinekernal side down in a small non-stick frying pan, and cooked it until I could smell toasty pinekernals.  This completed the cooking the fish needed. 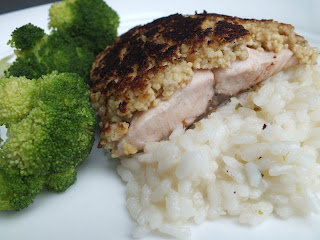 I served this with broccoli and a risotto flavoured with thyme and lime.
Posted by Lois Parker at 20:39