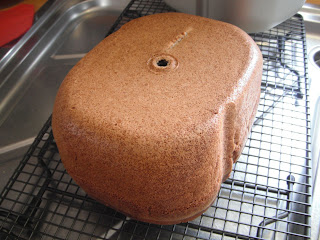 The small loaf of bread I made yesterday worked very well.  I only used 200g of flour so thought I should see if it scaled up OK.  I made the same recipe with 500g of flour, the only difference was no seeds as I had run out.

I set the process going, Rye 07 on the Panasonic, then part way through thought I should tell the machine I was making a large loaf (it has three settings).  It turns out that if you select the rye programme you can't adjust the size or colour settings.  Now, obviously, when I was studying the chart to start with I should have noticed this.  I didn't.

I am also not sure if I clicked the bowl with blade into place properly.  You can't test this by simply telling the machine to do a stir - a simple extra pulse button would be good.  I didn't look inside when it was in the kneading stage.  Yesterday, with the sunflower seeds in the bread, I could see in the finished loaf that the batter had been stirred as all the seeds were oriented by the blade in a circle.  I wondered because the blade was completely inside the loaf with I shook the bread out of the  tin.

I measured the temperature inside the loaf when it came out of the machine.  It was only 85C.  I waited until the loaf was nearly cold before cutting.  It is a little soggier than I would like so have put it back in the normal oven for thirty minutes. It would probably only have needed an extra ten minutes in the initial bake, but now it needs quite a bit of time to get back up to temperature. 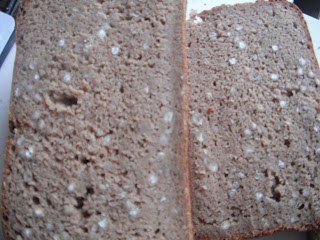 When cooled I sliced the bread.  It is fine to eat but does show the slightly claggy layer at the bottom which shows that it didn't quite have the strength to hold the rise.  I would need to reduce the water.  The batter was very liquid.  I hadn't cut the liquid even though I had left out the seeds - I hadn't thought they would absorb liquid to any noticeable degree but it would appear they do.  The white blobs are the whole buckwheat grains - I didn't chop them as much as the previous loaf.

So, a bit more experimenting to do.  I don't think I would increase the loaf size given the dense base layer.  The loaf does produce a reasonable sized slice of bread.

The texture is lighter than a dense rye loaf but has some of the same moistness.  It holds together well and has a good flavour. It has enough integrity to make sandwiches and does not crumble when handled. 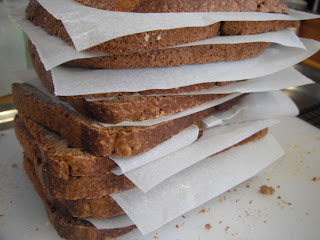 It sliced very easily and didn't disintigrate.  I have put the slices in the freezer in a polythene bag with non-stick paper between the slices.  The bread goes weird after two or three days at room temperature so is best stored frozen in individual portions.
Posted by Lois Parker at 18:34