Learning how the machine handles seedy bread and that with buckwheat. This time I decided to find out what the plain flour, water and yeast mixture produces - a 'white' bread

Mix together in a bowl and pour into bread tin.  Set the Panasonic Bread maker on Setting 1 and tell machine it is an extra large loaf with a dark crust.  Lets see what will happen!

Well, what happened is that the batter rose a lot and collapsed when cooking.  Not a surprise really given how wet the mixture was.  If I was baking such a wet mix with so much yeast by hand I would have let it rise about a third more than the initial batter volume and then baked.  This turned out about 2.5 times as tall on the edges as the initial batter.  The batter was 5cm deep in the tin and the loaf is 12cm high at its tallest point.


However, despite the central collapse and the large hole left by the blade, the texture was even.  It hadn't produced the claggy bottom of the previous version, perhaps due to the different setting - but I don't know what difference telling the machine to do an extra large crust with a dark crust does.  There didn't seem to be any difference in the cooking time and there is no read out of the temperature.  I might ask Panasonic what these controls do to the cooking programme.

The bread is very soft and light - quite astonishingly so.  The slight rolling of the dough seen on the slice is probably due to my impatience - the bread was still slightly warm when I sliced it.  I find waiting for bread to cool in order to find out how it worked is the hardest part of baking.

The initial cut through the middle of the loaf shows the dip in the middle and the hole left by the blade.  This may have been exacerbated by cutting before it was completely cold. 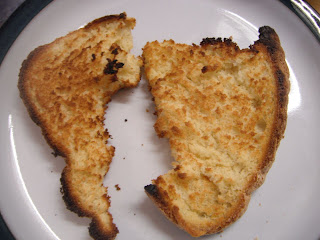 The bread toasted well the next morning though I couldn't cut it neatly.  The very light texture and the hole from the blade made this difficult.  As the bread is more moist than wheat bread the blade of the bread knife also tends to stick.

The trick is to manipulated the quantities of ingredients to get maximum lift with minimum risk of collapse.  I have some potato protein I have been sent to test as an aid for gluten free baking, so I think I will replicate this collapsed loaf with some of that to compare.
Posted by Lois Parker at 20:44