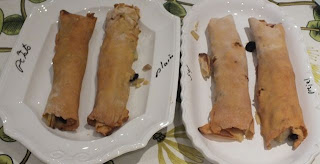 It became a irresistible project - to try making apple strudel with four versions of pastry quite late this evening.  So, a quick look on the internet and the second hit was  a review of strudels by  Felicity Cloake in the  Guardian.  No doubt it would have been better if I remembered to check the recipe when I came to making the strudels - I forgot to brush the pastry with melted butter and then wondered how I was supposed to get all that butter on top of the rolled strudels.  Butter before filling would make the filling less likely to make the pastry soggy and help it to be flexible.  Buttering the baking sheet or using baking parchment would have made it less likely that the strudels would stick too.  This is what I get for making tests too late in the day.  I found a lot of liquid spilled off the baking sheet so it would be better to make this in a shallow tin like a swiss roll tin rather than a flat cookie sheet.

I made four versions so I could test my usual flour, and then flour with some tapioca gel that I made for the purpose, some dry prejel tapioca and some Solanic Potato protein. In the past I found that the gel tapioca made it much easier to make very thin pastes for pasta, though I also found that these worked better without egg.  I didn't try a non-egg version this evening. 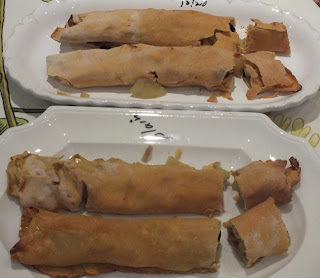 I mixed the egg and butter into the flour and then divided into four.  One portion was used plain, one had 7g prejel tapioca powder, one five g potato, and one a couple of teaspoons of the gel I made myself (enough to work into a dough). 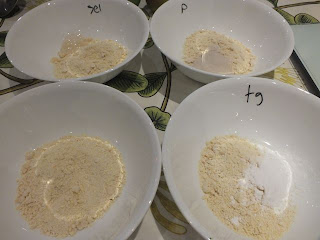 The doughs handled very differently.  The gel I made myself gave a lovely flexible dough once the gel was worked into the flour mix.  The dry pre-gel tapioca and the plain flour took a bit more work to get a soft dough.  The batch made with the potato starch, which is excellent to reduce slumping in risen breads, was very different; I needed to add more flour as the amount of water I used with the others produced a slurry.  I must have used far too much in this test as it also made the pastry taste weird.

All four pastries rolled easily to a stage where I could see text through them - I didn't struggle to get a finer pastry by using clingfilm to avoid sticking.  I was aiming at a reasonable pastry that I would be prepared to make on a normal day rather than one which took a lot of preparation. 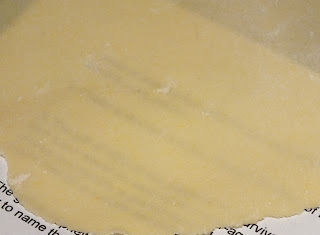 We liked the two pastries made with the gel/prejel tapioca best. The were light and crisp rather than hard.  The potato pastry cut the cleanest but was tough and tasted odd. It is a while since I used this and I am sure that I put too much in - when the strudel was cold it held together very well but was too hard to be inviting. The plain one was good enough that I would make this again without any additives, but compared to the prejel pastry it was a bit harder rather than crisp. 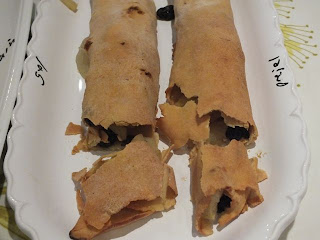 The tapioca versions also seemed to bring out the apple flavour compared to the plain flour.

I don't think the butter on top of the pastry improved the strudel much if at all so I wouldn't bother in future, especially since I keep my dairy intake very low.

I didn't sprinkle the top with nuts or sugar as I wanted the pastry to be easy to judge.  Flaked almonds on top would make the whole thing crisper and more flavoursome.

Overall I would say if you really fancy a strudel the plain flour will make an adequate pastry.  Of course it is years since I made a strudel or even ate one, so I may be making something that bears little resemblance to a proper wheat flour strudel.  However, if you want a rolled fruit filled thin pastry these are fine. If you can't get hold of pre-jel tapioca, which I got through a LinkedIn contact, making it yourself is easy and almost as good in this recipe.

To make tapioca gel
10g tapioca flour
100ml cold water
stir together then cook on a low heat stirring constantly until a clear gel.  Use this for flatbreads to make them easier to roll and more flexible when cold, to make pasta, particularly where you need to handle it such as ravioli.

700g Apples - I used half granny smith and half braeburn, peeled and chopped
50g raisins soaked in 40ml liqueur (soak for a couple of hours if possible) drained
zest one lemon
50g sugar
1/2 tsp mixed spice

Method
Mix egg and melted butter into flour.  Add water (or gel) to form a dough.  Mix well - running dough through a pasta maker works very well or letting it bash in a food mixer, but I just squished it for a couple of minutes in my hands.  Wrap in clingfilm and let it sit for fifteen minutes at room temperature if possible to ensure the flours have absorbed the liquid.

Roll thin, using plenty of flour to stop it sticking to the worktop.

Place the filling along one edge and roll into a log.  Slide onto the baking sheet/tin. 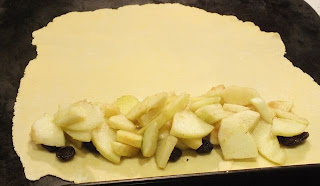 Bake at 190C for 20-40 minutes depending on how large your strudels are.  I made four small strudels and they were cooked after twenty minutes. 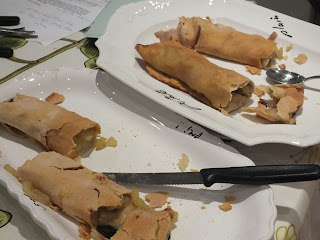