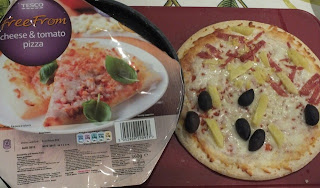 I spotted these pizzas in the freezer today while I was picking up Tesco FreeFrom fish fingers. I find making my own pizzas so quick and easy that they take hardly any more time than opening a tin of soup, but was curious to find out what these would be like.

You need to let the pizza thaw for ten minutes before cooking in a hot oven, and then bake for about twelve minutes.  They are done when the cheese melts and begins to go brown.  I added some extra toppings to the pizza before cooking - they don't come with pineapple, pepperoni and olives.

The pizza had plenty of mozzarella cheese on so you get that traditional stringy cheese look when you cut the pizza.  I took lactase pills with my lunch as I would not normally eat anything with much dairy in. 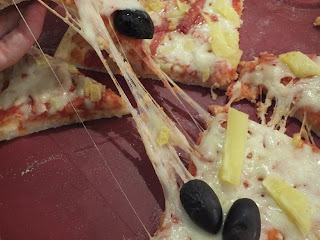 The base held together, wasn't claggy or dry, and would be easy to eat as finger food as well as with knife and fork.  I found it a bit flabby straight out of the oven so put it on a hot griddle for a couple of minutes to crisp it, which gave it a texture I preferred. 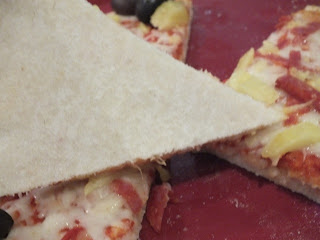 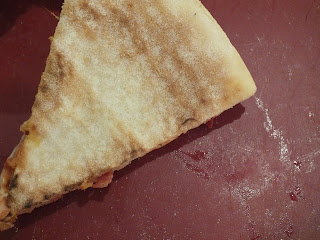 The tomato topping is a bit bland.  I presume it has been formulated to please kids, and has no herby taste to me.  I sprinkled mixed Italian herbs on top and Rod squirted barbecue sauce on his slice to give it more flavour.

This pizza was pretty good, and the base a lot better than those in the pantry section that I tried before.  If I was to use them again I would add more flavourings before cooking and start the pizza on my griddle pan and then put in the hot oven the way I do when baking my own pizza.  The dough has several plant gums in to hold it together but not xanthum. It is made from maize flour.

Overall I think this is a good pizza.  You could add any flavourings you like, and so it could suit almost anyone.  It cost £2.50 and could easily feed two or three people.  If three people shared it each would have 270 calories.
Posted by Lois Parker at 13:44