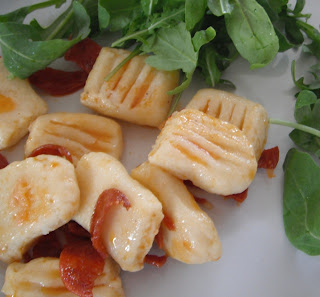 Somewhere I read that originally these were made with potato and buckwheat.  That makes sense if you lived in Northern Italy where wheat didn't grow and you lived off potatoes.  Buckwheat is a good flour to use if you want to add cohesion to things, but it does have a strong flavour of its own.  A potato and buckwheat gnocchi would give a change from potatoes and buckwheat pancakes as a staple starch.

I made these with one large potato, microwaved until soft.  I slipped the peel off and mashed it thoroughly with a fork and then beat it with a wooden spoon.  I gave my potato ricer away as part of the moving house  tool reduction.

This potato was about 200g.  I added 50g flour and then added beaten egg until I had a dough that was soft but could be handled.  This used about half the large egg.  The last recipe I looked at said add egg to the potato and then add flour to get to the right consistency - so if you can't bear the idea of having egg left over work this way around or make bigger quantities.  This served two with left overs but we don't eat large portions.

The dough feels very pleasant to handle, soft and quite easy to control (though of course it isn't being rolled thin). 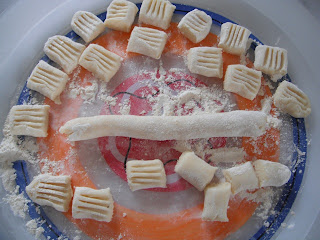 Roll the dough into sausages shapes with a little extra flour.  Cut into 1-2cm bits and press with a fork on the top.  The instructions I read said put on your thumb and press with a fork, and I couldn't figure out what that meant.  However, when eating these, it occurred to me that what they had been suggesting would give a depression on one side and ridges on the other, ensuring that any sauce served with these would cling and fill the hollows. 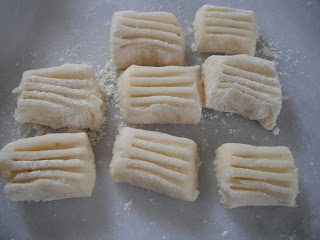 Boil these in water until they rise to the surface.  Drain and serve with whatever amuses you.

TT has always been a bit dismissive of the very idea of gnocchi, but he enjoyed these stirred into frizzled strips of pepperoni and served with rocket salad.