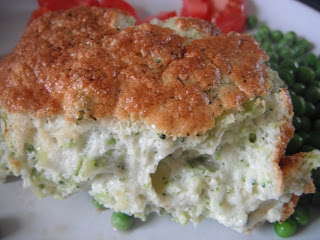 I normally make souffle using cornflour to thicken the sauce before mixing in with egg yolk, whipped egg white and whatever flavouring I am using.  As I have run out of cornflour I thought I would find out how my usual flour mix (40% urid 40% tapioca, 205 cornmeal) works in a roux, and thus in a souffle.

The roux worked fine - just use the same technique you would use with ordinary wheat flour - 1 tbsp of butter, 1 tbsp of flour, melt butter, stir in flour, cook for a minute to remove raw flavour. 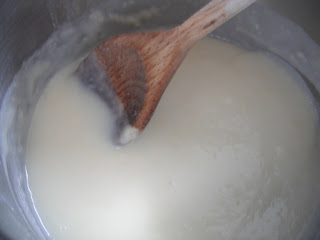 Add hot milk (I used rice milk), stir in egg yolk when cool enough not to cook yolk, add flavouring.  I used grated Parmesan and chopped broccoli with a pinch of chilli powder and pepper.  Gently fold in whisked egg whites, turn into greased dish and cook in 170C oven for 20-25 minutes.  I like souffle firmly cooked all the way through, but officially you are supposed to have the middle still a bit runny (yuk).  So, cook to the point you like it.  I do sometimes put souffles back into the oven to cook a bit more after starting to serve - take the cooked bits from around the edge and let the rest cook a few minutes more.

The souffle was fine.  I reckon it was indistinguishable from any other souffle I have made, no matter what thickener I used.
Posted by Lois Parker at 07:47