My poor mother has been whisked off by my brother for a couple of hours.  I told her she would have to just keep out of my way, but I don't think she imagined being banned from the kitchen for so many hours.  When I am wearing my baking hat the kitchen is off limits - at one point I had a five star rating for my small baking business from the Heart of England Fine Food association, and it is hard to be any more slip shod than necessary working in a stranger's domestic kitchen.  She has been sitting in the living room with CNN on at full blast - the tv sound is erratic and vanishes for hours at a time, so she decided simply leaving it on once it worked would be best.  It is boring though, and she says she couldn't sit and watch tv all day.

Yesterday my brother and his family came for a visit, and they were force-fed chocolate cake and strawberries.  Wasn't sure if it was a good idea to get them to try the test cake - what if they had hated it?  Too polite so say I expect, but anyways, eaten and so fore warned. 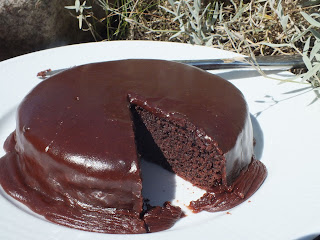 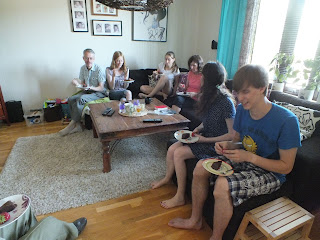 My make-shift cooling racks stood up to the whole process.  They would have been less good for a any other form of cake, but they worked fine for the cupcakes. 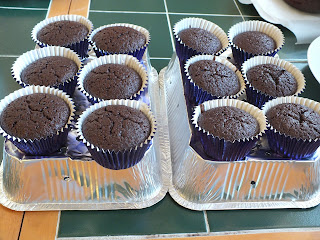 All cakes made and stored in my dust/fly-free dresser- covered by a sheet.  The air here feels lovely and clean, and there are hardly any insects outside in the garden, but I prefer to be sure.

Started the day with icing the cutting cake.  I brought roll-out icing for the top to make it look a bit more formal, and needed a layer of buttercream to glue it in place.  There is a food mixer, and I am using the bowl all the time, as being metal I can be sure I have washed it adequately.  I won't use the mixer though as there is usually food debris in the stand and I don't want to risk an errant blob of wheat.  Fortunately I brought a rather fierce wrist brace, so with that and a disposable catering glove managed to do the whipping of the butter and icing sugar required.  This is the only bit of the whole task that is physically hard work. 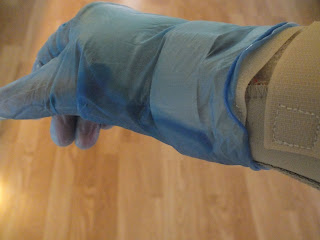 Lilac icing on top, a pre-rolled icing ribbon around the edge, and some bits of glitter.  Upturned saucepan as a turntable. Not as neat as I would have liked, but there are lots of butterflies to attach tomorrow.  Just hope the cake is big enough to hold the spray. 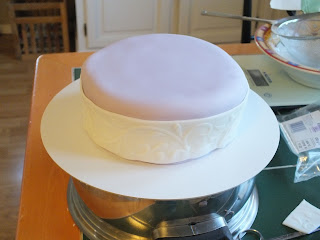 Next job...make a big batch of my chocolate fudge icing and decorate the cupcakes.  I will need to add the sparkly sprinkles as I ice the cakes as it sets with a firm top and the decorations would just roll off.


My mother said she was worried she would be hungry living a gf life for five days, especially since we were arriving in strange house with our suitcases. She may well be feeling despair at the multitude of choices she has each mealtime, but she is not feeling hungry.  The local supermarket, about a mile away, has an excellent range of fruit and vegetables and biscuits, pasta etc that are gf.  Need to keep an eye out as lots of the stuff has wheat starch in, so not suitable for me or my brother and nieces - saw a lovely looking batch of crispbread and was about to buy it before I read the label.  I've been enjoying lemon wafers and cinnamon cookies, all being eaten in the interests of research. I have been unable to buy things like salad dressing as the ingredient lists are too difficult for me to decipher, but that is not too hard to bear.  Good olive oil, lemon, basil and dill growing in little pots...dill in the supermarket!  In England it is a very difficult herb to find.

May not want to go home, seems a shame not to do as the Swedes normally do, which is to live in a log cabin next to a lake for the summer.