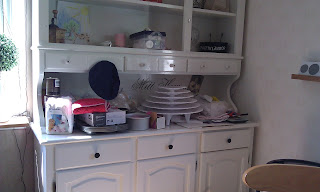 There is much to recommend travelling with someone who needs the assistance of a wheelchair at airports.  You get whisked past whatever queues there are as porters cant afford to hang around in queues when they are needed again for the next person.  The system at both Heathrow and Landvetter was efficient and courteous, and at the arrival airport we had the wheelchair pushed all the way to the car.  The groom's grandparents picked up up and were waiting with a big sign at the arrivals point even though we had a tail wind and arrived nearly half an hour early.  A quick stop to get some groceries so that we would not have to go trudging around, got to the house and settled in.  The flat is lovely, spacious, with a good kitchen, much better, of course than mine at home as it is proper kitchen (not a small line of worktops and equipment squeezed along the edge of the living room).  The oven is large - I need to to do a sample batch of the cupcakes to test how it works.

The groom's mother had done my bulk shopping for me.  I was a bit surprised to find what felt like a bag of flour in with the eggs, oil, butter and sugar..maybe she thought I just forgot to request some....but of course I have no idea what the words mean.  I have connected to the wifi so will attempt to figure this out later, but for the moment the rogue package has been put into the flt owners pantry.

I have started washing the kitchen.  It is clean, but clean for people who eat bread and those who can't mean two different things.  I probably shouldn't have climbed on a stool to clean the extractor fan chimney as I can't reach to the top and the swooping angle of my cleaning cloth is quite visible about ten cm from the ceiling.

The strawberries are the best I have tasted.  Bought in a punnet from an ordinary supermarket they taste as if you were standing in a field in the sun and had just picked one - and then add extra flavour even if you have chosen a good variety.  Forget Elsanta, these were amazing.   Lunching on strawberries seems good enough for me, but I do need to do proper meals too.  My mother has agreed to be gf while here so that I am safe; in return it seems reasonable to make something moderately tasty and at normal times of the day - though what normal is when we have been up since three this morning I am not sure.

I unpacked my large red suitcase - which, contrary to the many merry comments on the trouble I would get from customs, caused no trouble at all.  One of the cupcake stand layers has a crack but it shouldn't compromise its operation this weekend.  Unfortunately most of the stuff has to go home with me again - I brought four cupcake tins, a rolling pin for icing...I didn't bring any cooling racks so will have to hunt for some of those.  I figured it must be possible to buy some cheap ones here if necessary; if my host hasn't any (she said to use anything in the kitchen) then I can leave them here for her. There is a fridge magnet which states "cooking by appointment only" so there may not be stuff I would expect to find in a baker's kitchen.

It is very hot here - about 30C, and there is a garden, so I think a little sitting outside with a book is probably the next step.  If it rains usually I might as well enjoy the sun for a bit.  Next challenge is to figure out how to make the shower work, twisting everything obvious hasn't produced any water...
Posted by Lois Parker at 14:50