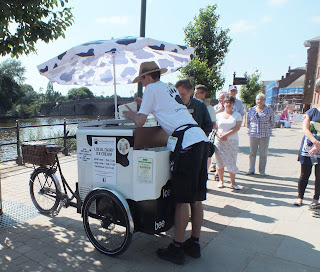 Strolling along the river here in Worcester, enjoying a seasonal but nonetheless unusual sunny day, I spotted an ice cream seller who had a clear label stating that they had gluten free cones.  I stopped to talk to him about this - waiting until he had sold his last ice creams as the queue of people kept rematerialising and I didn't want to interrupt his work.

I had an opportunity to watch how he worked.  Each cone was handled, so it was clear that his hands would be covered in gluten.   When I asked how he would deal with a request for a gluten free cone he showed me the process:

The gluten free cones are kept in an airtight container in a basket on the bike. 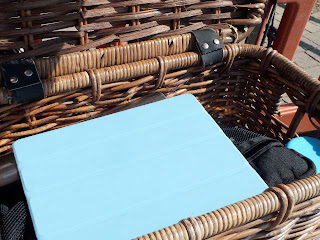 They have hand-sanitiser wipes, which the staff use before opening the box and removing a cone. I was relieved it wasn't just hand sanitiser spray - which I have been offered in the past to 'kill' gluten ( the same as people who say chips cooked in the same oil as batter is ok as the heat 'kills the gluten'). 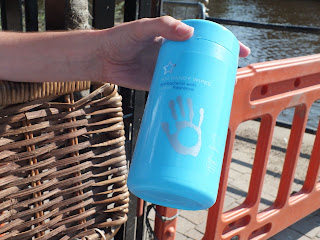 I asked if he would mind if someone very careful, like me, wanted to take my own cone out, and he said that would not be a problem.

I didn't try an ice cream, but they looked delicious, and included apple ice cream amongst the usual rum and raisin, vanilla and raspberry ripple. 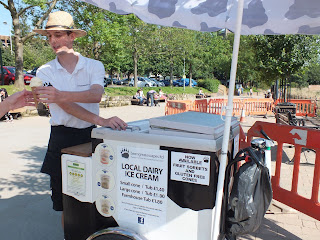 They also carried individual tubs of ice cream, with sealed spoons, so that would be another safe option.

This bike was operated by bearsgreatescapes ltd - "Purveyors of Fine Worcestershire Ice Cream and Bespoke Tricycle Maker".  The ice cream was sourced from Bennetts Farm.

I spotted Stuart again today on my stroll along the river. I bought a raspberry sorbet *they had mango and blackcurrant as well) and so got to try the whole process.  An additional good feature is that he rinsed the ice cream scoop in hot water from a thermos before digging out the sorbet.

I have also had a reply to my email that I sent the company with a link to the blog, asking me to let them know if there is anything else they could do to make things better.  That arrived the same evening - and what is even more amazing is that Stuart had been told about the conversation.  Excellent work.

And the sorbet?  Well, not home-made/top restaurant quality, but pleasant and a lovely treat on a hot day.

I didn't suffer any symptoms so their cross-contamination control mechanisms work.