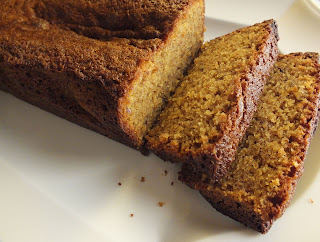 Brought back a jar of marmalade from the storage unit made in 1999.  I prefer the crisp flavour of new marmalade but Rod likes this rick dark caramelly flavour.  I used half a jar to make him a cake using a recipe from the Telegraph as the base. This cake has a chewy toffee crust and gently orange middle.  Add more zest if you want a zingier cake.  I used satsumas as they were the only oranges I had.

I used half ordinary sugar and half a solid block of dark brown sugar which I had to dissolve slowly in the egg, so I didn't follow the creaming method fully.  I did cream the loose sugar, so for the first time in ages I got my food mixer out (thanks Lindsay).  The rest of the dissolved sugar and egg mix went into the mix after the butter and sugar was light and fluffy.

I added flaxseed as Rod's new pills mean he needs to increase his fibre intake.  It has the added benefit that I don't get tempted by these cakes as my delicate guts can't cope with flaxseed.

Ingredients
75g butter, room temperature.  If you are hasty and zap in the microwave be careful as the middle can become liquid before you realise
175 sugar (soft brown or other)
2 eggs
125g dark marmalade
zest of two satsumas and juice of one
175g self raising flour (40% urid, 40% tapioca and 20% cornmeal, with 1tsp of baking powder to 100g flour)
25g flaxseed (optional)


Beat the butter and sugar together until light and fluffy.
add in the egg, juice and zest, beat, then add the marmalade
Stir in flour and flaxseed until evenly mixed

Spoon into the prepared tin and bake for 35- 45 minutes.  If it looks wobbly when you first open the door at 35 minutes leave it in.  It should leave a knife clean when you test it.

Leave in tin for ten minutes.  Peel off paper and cool on a rack.