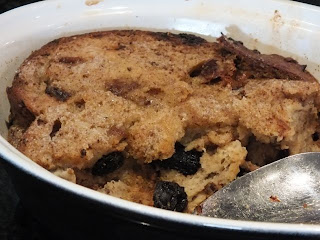 I bought a loaf of Marks and Spencer's 'Made without wheat' Fruit bread.  I wondered how well it would work in a bread and butter pudding, so I took four slices of this bread, added egg and rice milk, raisins, sugar and spice and baked in a medium oven for twenty minutes. I skipped the butter to make this dairy free. In this case I used too little milk, so the pudding was a touch drier than it should have been.  Apart from that it was soft and delicious inside  with a crisp sugary topping.  For anyone missing bread and butter pudding this would be a good choice.  It didn't go to crumb or claggy, and absorbed the liquid very well.

Mix the egg, milk, oil, spice and sugar together
Place four slices of bread in an oven proof dish.  You can make it fancy, neat or just cut roughly and pile in.  Sprinkle the raisins between the bits of bread.
Pour over flavoured milk mixture.
Sprinkle with a bit more sugar to give a crisp topping.