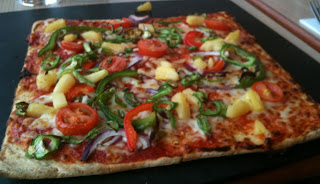 Pizza Hut worked with the UK Coeliac Society to produce a gf pizza.  I finally tried one today, having had a family party cancelled due to illness- what better to do on a day of filthy weather than potter off to an office supplies store and grab the opportunity to try this pizza in the cafe next door.

We don't tend to use Pizza Hut as their normal pizzas have been dull in the past. However, there at the door minutes before they opened meant that the place would be clean and the atmosphere not too thick with flour.

I ordered something called a Veggie Hot.  I decided to try the standard pizza rather than telling them to leave off the cheese.  I took some Lactase but didn't take any glutenzyme, so I could see if I got contaminated.  I asked for (sorry folks) an extra topping of Pineapple - partly because other reviews I had seen said the pizzas were dry. 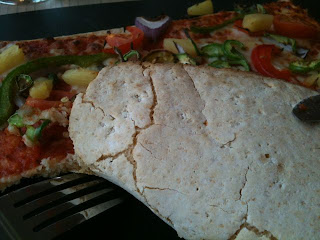 The pizza looked fine. The base held together.  It could be eaten by hand or with a knife and fork.  The base itself was rather sweet and had a flavour-deadening effect on the topping.  By scraping all the topping onto half the pizza I had a bit of flavour, but it was astonishing that they could take tomato paste, cheese, green pepper (capsicum), chillies, onion, fresh tomatoes and pineapple and combine them in such a flavourless way.  The extra pineapple topping was not enough to add much succulence, and it cost £1.10 extra. 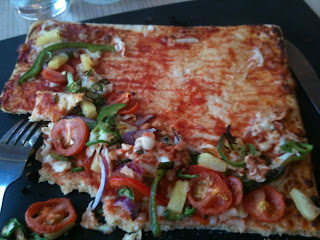 I was offered a salad bowl - you can just fill up at their salad bar while you wait for your pizza.  I said I didn't think it was a good idea given that avoiding cross contamination might be difficult, to which the waitress smiled, shrugged, and said it probably wasn't a good idea.  I didn't push this, but I was surprised she didn't offer to get a simple fresh salad from the kitchen.  Maybe they put out all the vegetables at the start of the day - but that seems unlikely as some of the pizzas come with rocket.

So, full marks for making an effort.  Having the pizzas arrive a different shape is very sensible - the better quality gf food is them more essential it is that it is very clearly identifiable.   It also reminds that staff at every stage that they are dealing with gf food.

As we were leaving a group of eight young people arrived and I noticed two of them ordered a gf pizza.  I am sure that being able to get a gf pizza makes the social side of life much easier.  It is just a pity that the flavour is so lacking.  This pizza felt as if whoever invented it had never eaten it but had focused solely on the construction and contamination sides of the issue.  I still feel fine an hour later so I think this pizza was safe. 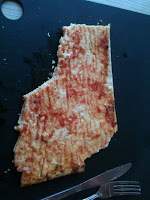