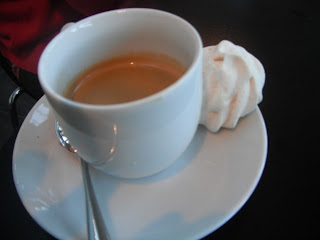 My friends from the City & Guilds course I did a few years ago met for our December jolly at Holloways, an amazing store and cafe in the rolling hills in the Worcestershire, in a village called Suckley.  I had phoned the day before to check that they could feed me, and was impressed with the calm and informative way in which they said that they did have lots of food that was suitable for me.

Whilst it may seem strange, I had a surprisingly delicious curry while my friends ate turkey or nut roast dinner...not because that was the only thing that I could eat safely but because it was what I fancied.  I have actually got to the stage where I find it difficult to chose what to eat in restaurants because there was such a long period where all I was offered was bare salad- or even told there was nothing I could eat.  I didn't have a starter, but the other person who needed gf free food had a thick vegetable soup and gf rolls - they looked like DS ciabatta, which is almost the only packaged bread I buy for myself occasionally.

I had a desert as well, again a choice.  How difficult,  I chose meringue with mulled fruits minus the cream.  I also ordered coffee.  I wondered if they would fall down at this final hurdle- many restaurants seem unable to translate an order for a gf meal into a a coffee without a biscuit at the end of the meal.  The coffee came - with a mini meringue.  The waiter apologised that it was meringue overload; normally they would have given me a gf brownie, but as it had butter in and I had said no dairy (though it is not so big a problem for me) they had carried this through to the end.  I was very impressed.

I also found it quite surprising that I had no cross contamination symptoms, even from sitting with my friends eating flaky breads, stuffing and cakes.  I often find I feel ill just being near people eating glutened foods, so this is very impressive. 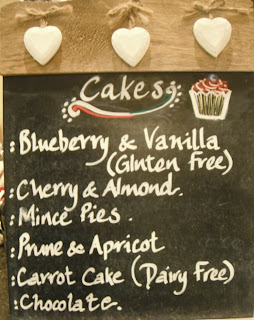 The general atmosphere was very pleasant, the staff attentive, inventive and willing to please.  It is a pity it isn't nearer - I'd make it a regular venue for lunch and coffee breaks.  They even had a blueberry gf cake - I spotted this as I paid my bill.  I gave the staff a 60% tip and sincere thanks.  It is a long time since I enjoyed a meal in a restaurant as much.