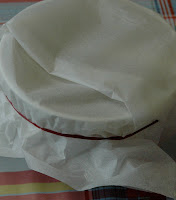 I don't normally make a Christmas pudding - cant remember the last time I did. I know I used to have a pudding basin and I used it when I did my first degree in St Andrews nearly three decades ago. Can't find it know. Rod has been sent to borrow one from his mother.

I got a recipe from the BBC, a gluten-free recipe - I don't normally bother with these, preferring to adapt a normal recipe since as you all know by now I wont touch Xanthum Gum. All the recipes I looked at asked for fresh breadcrumbs; well, where's a girl to get that if she can't eat bread? This recipe uses pureed whole pear instead, so a quick trip to the freezer in the shed since I haven't any fresh ones, and off I go.

I didn't, of course, follow the recipe. That would be too hard, even though I did a trip to the supermarket for the dried fruit. However, getting the proportions about right, adding crystallised ginger after consultation with him who is likely to eat it, chop hard white vegetable fat I fortunately had in the fridge after a foray into attempting to make sugar paste flowers, and I have a complete batter. I add some almond brandy, then while Rod is off fetching the basin I decide to make him some fruit cake. We normally always have some in stock, but somehow the last piece got eaten this morning. I add Cognac to that, then, forgetting I had already added the booze to the pudding give it a slug of cognac as well.

I hardly drink any alcohol, as about a teaspoon of wine is enough to make my legs wobbly. I don't really know what works well, and have got into trouble for adding the wrong things. A bit of very nearly crossness arrived in the household one day when I added Lagavullen to the marmalade, but after it was tasted this became a speciality. I can't eat that marmalade myself, just taking the lid of the jar off is enough to send me to the other side of the room, but for whisky lovers it is wonderful.

The real problem with the pudding, ignoring for the moment the five hours steaming it needs, is that I will have no idea if it is any good for weeks! If I was baking normally I would put a little batter into a small container and make a testing cake - perhaps something could be done along these lines, but it still wouldn't show what the maturing period would add.


recipe (adapted from BBC gluten-free Christmas pudding by Michelle Berriedale-Johnson from Food Matters Magazine).
The aim is to produce a brighter, zingier pudding than usual as that is the kind of fruit cake Rod likes.

Mix together the dry ingredients. Whizz the pear, egg and liqueur in a blender and stir into the fruit with the fat. Put in greased pudding basin/s. Cover with a double layer of greaseproof paper with a pleat to allow for expansion, and hold in place with a rubber band. We collect the ones the postman brings - they are usually good for one steam but then the rubber perishes so chuck them away.

Place in pan large enough to hold the basin with some headroom, pour in water to half way up the bowl and put the lid on. Steam for four -five hours, checking regularly to make sure there is still enough water. Leave a window open or put on the extractor fan so your kitchen doesn't steam up.

To serve, some time later, reheat in steamer for two hours or heat in microwave for five minutes - or eat cold.
Posted by Lois Parker at 13:02 2 comments:

Great food that just happens (by cunning design) to have no gluten in it. 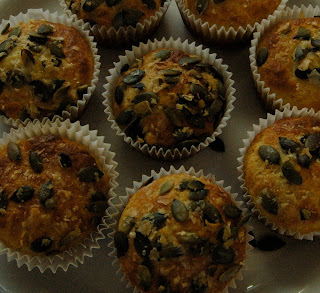 Today is my birthday. As special treat I let myself test a recipe before I did anything else on my very long ToDo list.
I need something to eat with soup or salad, so thought a cheese muffin with a crunch topping, that could be kept in the freezer until needed, would be good.

Flours – I used this mix to give colour, flavour, cohesion and moistness

about 3/4 cup milk – to give sloppy batter

Sift together dry ingredients including cheese. Mix in egg and oil and add milk until you get sloppy batter. Don’t worry about the usual ‘be careful not to over-mix stuff’. This doesn't matter if you have flours with no gluten in.

Spoon batter into paper-lined muffin cups, filling each about 2/3 full. Sprinkle with seed and cheese topping. Bake in 180° C. oven (170 for fan) for 20 minutes or until golden brown. Eat fresh or freeze.