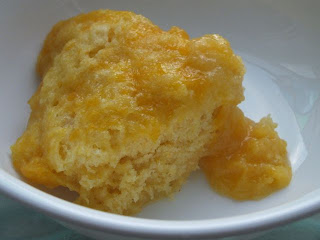 Continuing my testing of puddings in the microwave (cheaper, quicker and easier) I made one with some fragrant zingy oranges.   Unfortunately not straight from a tree- yet another year where I haven't made it to Seville for the orange season.  I don't think this recipe is quite right yet - if anyone makes a variation on it that works well perhaps you could let me know.

I based the recipe on this recipe for self-saucing orange pudding.

Mix remaining juice and sugar together.  Heat to dissolve sugar then bring to the boil.  Pour carefully over the pudding; it looks weird but that's what you do.

Cover in clingfilm, and cook on medium for 8 minutes.  Leave to sit for a few minutes, covered.

This pudding is quite fluffy but has a texture which reminds me slightly of dumplings.  The original recipe asked for melted butter, and a larger amount, which might have given a better texture. 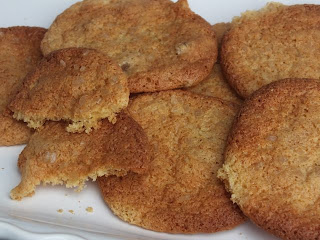 I based these crisp chewy biscuits on this recipe.  I didn't have any bicarbonate of soda and didn't want to use butter, and of course I was using my gf flour mix rather than wheat.  I also added chopped crystallised ginger for an extra bit of texture and flavour.

Place dollops on baking sheets, lined with parchment paper. Leave plenty of room as they spread.  Sprinkle with sugar crystals if you have them.  Bake for about ten minutes at 175C fan.  Keep an eye on them and remove from the oven when they are a lovely golden colour - similar to the colour of the syrup.

Cool on a wire rack on the paper for a few minutes to begin to harden. They are too soft to take off the sheets immediately.  If you haven't used paper they will take longer to harden as the tin will hold the heat. 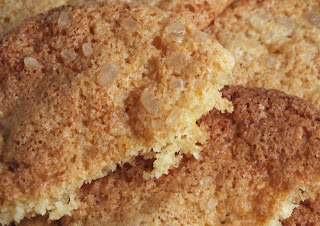 These biscuits are crisp and chewy, spicy and sweet.  My patient taster says they are among the best ginger biscuits he has ever tasted. 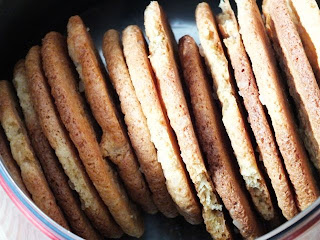 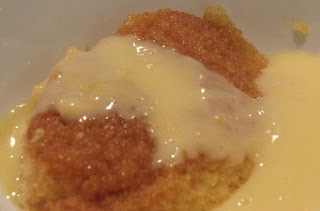 Winter, river in flood, Wales lost at rugby...it seemed like a good day to have a sweet pudding.  I found a steamed syrup pudding recipe made in a microwave, and decided to try it.  I used to make steamed puddings in a pressure cooker when I was a student three decades ago, but now I don't even own a pudding basin, muslin, pressure cooker- though I probably could lay my hands on some string and I reckon I could still tie one of those double loop over the top to make a handle arrangements if I tried.

This recipe makes two good helpings or three if you are more restrained.

3 tbsp Golden Syrup, jam, marmalade...whatever you want on the pudding.

Cream butter and sugar together.  Stir in egg and vanilla.  Mix in flour.
Put syrup in base of a microwave-safe bowl. Place batter on top of the syrup.  Cover bowl with cling film. It will balloon while cooking but don't worry, it turned out fine. 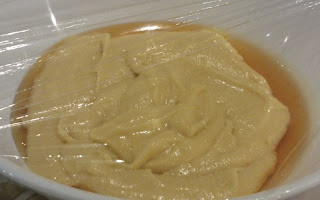 Cook on medium heat in a microwave for five minutes.

When you want to take off the clingfilm I recommend you stab it swiftly with a horizontal knife so that as it collapses the film lands on the knife rather than the pudding. 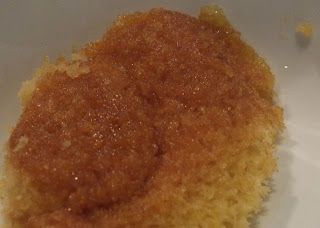 Serve with custard or eat plain.  I found it a bit sweet so sprinkled lemon juice on top, but Rod ate his with custard and gusto.  I don't think people would know it had been rustled up in a microwave and took less than ten minutes from having the idea to finding the recipe, making the batter, cooking and serving.