Another gf wedding cake - a chocolate cupcake tower in Sweden

Ages ago I said to my sister-in-law that I would make her daughters' wedding cakes if they wanted.  Well, that remark was remembered, and as a result I am flying to Sweden in July to make a purple and silver chocolate cupcake tower for my niece, who has coeliac disease and also wheat intolerant.  I suppose I should have realised that this wouldn't be an English affair, as at the time the family lived in Mongolia.

It sounded simple.  I have never been to Sweden but often wanted to take a trip around Scandinavia.  First choice would be to have my husband drive the campervan there for the wedding so that I could stay safely, bake the cakes, have an adventure around the wedding.  Unfortunately, though retired,  he is working and can't take the month off that I would like.  So, could I drive the van myself?  No, not on a trip of that length.  There used to be a ferry to Sweden - it still shows up on a google search, but it no longer runs.  A ferry to Denmark, drive, ferry, drive, or via the Eurotunnel and a lot of driving.  I didn't manage to get used to driving the van in the UK last November as planned due to the house suddenly getting a buyer, and only drove the Smart car in France, so don't think a three to four thousand mile trip on the 'wrong' side of the road makes sense as a first solo journey.

Rent a flat in the town and fly there.  That made sense.  I found a cheap flat a few minutes walk from the station on the internet, but after 'booking' it got a note saying it wasn't available.  All other self catering options were wooden cabins were thirty km away from the town - great for a boating/sauna holiday but not so good for getting cakes make and delivered. I looked into hiring a cabin at the Boras campsite, but they have very little catering equipment and are surprisingly expensive.  Renting a campervan on arrival at the airport would also cost a lot and the van would be likely to have an invisible layer of gluten on all surfaces.

One of the hotels in the town said they took special efforts to meet extra needs and even mentioned gluten.  I booked with them even though they were the most expensive hotel in town.  If I get glutened I can't do anything, so being cautious makes sense.  In the meantime offers of the church ovens and the future mother-in-law's means that the baking can happen.

I almost booked the whole thing on the internet, but then thought that maybe, as I wanted something a bit unusual, I should try a travel agent.  The Co-op in Worcester couldn't even find Sweden in their system.  However, I did eventually get a flight with better timings than the one I had found on the internet - arriving at midday in a strange place is much better that last thing at night when you still have to travel 30km.  I booked the hotel separately - more expensive, but at least it is done.

The travel agent rang the airline to check that it would be ok for me to take flour and baking kit in my luggage.  It hadn't occurred to me to check, so that was a useful thing to have done.  I have to get all the baking kit in my 23kg of luggage allowance.  I need to take all the fancy stuff like cupcake cases, sparkles and other decorations, I would prefer to take the baking trays as baking gf really needs properly clean tins which have not been used for wheat flour.  They, however, are heavy, especially if you take enough to allow 150 cupcakes to be make without it being a whole day activity.  I also want to take my giant tiered cake-stand.  It is plastic and folds down, but even so it is quite large and heavy.

And the flour?  Well, Shipton Mill still haven't brought out the flour mix so I will need to grind, mix and package the flour here before I go.  I have been experimenting with my usual chocolate cake recipe, and making it premixed - just add eggs, oil and water, stir, put in cases and bake.  I tried out a batch on my embroidery chums.  They were complementary on the cakes, but the three that took a batch of the mix to bake for themselves haven't reported back yet.  I wanted feedback on how robust the mix was with different ovens as I have no idea what kind of ovens I will end up using.  If the cake is easy to make and the instructions clear it gives another level of safety if I do get sick - then pretty well anyone will be able to make the cakes even with very little supervision.

As to what I shall wear?  I think I will take my baking clothes, but don't reckon there will be room for a posh frock.  As long as the cake looks great I suppose I only have to look clean and tidy - must remember not to go to the ceremony with chocolate batter and icing all over myself. 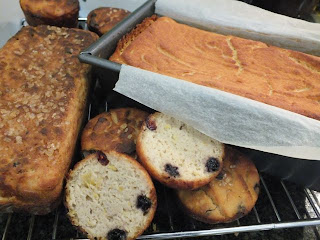