A quick pudding that doesn't include any tapioca for those who find it causes problems. 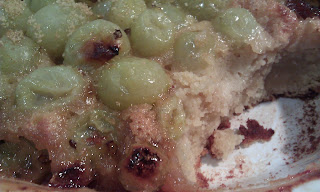 Mix together the egg, margarine, first 50g sugar, flours and baking powder.  Add liquid to make a softish batter - firm enough that the gooseberries can sit on top.

Put gooseberries on the top of the batter, and sprinkle over the other 50g of sugar.

Bake at 170C for about forty minutes.  If your fruit isn't frozen it may be cooked quicker.  Test with a skewer/fine knife to make sure the cake batter is cooked.

Eat warm or cold.  Freezes well.
Posted by Lois Parker at 20:53 No comments: 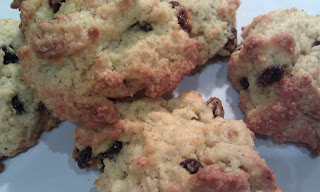 Mix the flour, spices and baking powder.  Stir in the margarine; I found it mixed in quite easily with a spoon.  Add the sugar, the egg and the raisins.  You should have a mixture that needs pushing off the spoon.  This will give a rocky high biscuit.  If you want a flatter biscuit add some liquid - juice, milk or water, to make a dropping consistency.

For extra amusement sprinkle sugar crystals on top before baking.  Add mixed peel, cherries or other dried fruit to suit your taste.

Bake on sheets lined with baking parchment/silicone for 12-20 minutes depending on how big you make the little buns.  If you want a firmer texture return to the oven and cook for a few minutes more at a lower temperature to help them dry out.


These have a soft texture and slightly crisp outside.  They have a light sweet taste with just a hint of spice.
Posted by Lois Parker at 18:04 No comments: 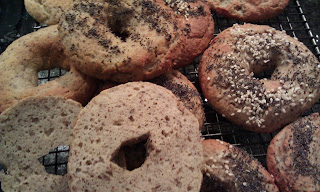 I've just made my first batch of bagels in the new flat.  Making things quicker  is important as there is less room to leave things to rise slowly, and in smaller quantities as there isn't the space in the freezer.  Making yeast breads without the long slow fermentation may reduce the availability of nutrients and increase tendencies to indigestion if you have problems, but for most people this is unlikely to be a problem.

Mix yeast into lukewarm water with the first tsp of sugar.  Mix the flour into this yeasty water.
Blitz the buckwheat, nuts and seeds to a fine texture unless you want whole seedy texture to your bagel.
Mix this into the dough, stir in egg and vanilla and syrup.

Leave to sit for fifteen minutes to allow flours to absorb moisture.

Add extra flour until you get a dough you can handle with floured hands to shape into rings.

Shape into rings and place on a floured tray.  Cover lightly with cling/plastic wrap.  Place in an oven with some hot water and leave the light on - this gives a warm steamy environment to help the rise.  Otherwise, anywhere out of the way where they won't get disturbed will do.  If it is cool the rise will take longer.

When the rings have increased in size prepare a large pan of boiling water.  Slip the bagels into the water carefully and cook for a couple of minutes on each side.  I tested a range of cooking times in the past and decided that being accurate on timings doesn't make much difference. 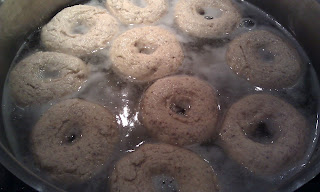 Drain on a cooling rack,

Sprinkle seeds on top while still wet if wanted.

Place on baking sheets - I use reusable baking liners to make sure nothing sticks.

Bake at 170C for about twenty minutes.  If your oven is uneven and some get brown before others turn the trays around.

Cool.  If not using in the next couple of days wrap and freeze.
Posted by Lois Parker at 17:50 No comments:

A while ago I tried to make a lemon pudding where the top is cake and the bottom a sauce.  It wasn't very good, being a rather gluey mix all the way through.  I think I put too much flour in.  Tonight's pudding looked revolting in the making but was delicious to eat.  I made it very tangy with three lemons.  If you like a milder pudding use two lemons.  It took me about five minutes to assemble. 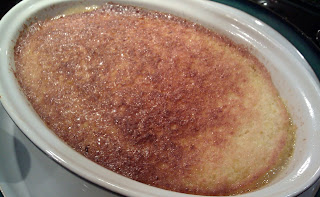 Mix fat and sugar together
add lemon zest, egg yolk and flour and mix
add rice or other milk
whip egg white until fluffy but not stiff and fold into the mix.

Pour into a greased baking dish.  Place in a larger dish and add water to about half way up the pudding dish.  Bake in a 170C oven for about 35minutes.

This produces a light crisp top with a great puddle of zingy sauce underneath.  I did find that there were some bits that seemed to be half way between the two that I didn't like so much, from around the edge of the dish, so I just didn't eat those bits. 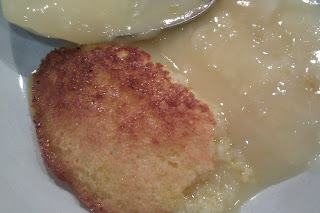 When I made mine I was being lazy and stupid and put the sugar in with the lemon juice and then added the fat - this made a revolting looking mess but I just added the rest of the ingredients and stirred until it was evenly lumpy, then folded in the egg white. This completely unappetising looking mess produced a good pudding, so the recipe is clearly quite robust and would be hard to ruin.

Serve with something creamy if people want to tone down the flavour.
Posted by Lois Parker at 19:24 No comments:

Carluccio's - I have forgotten how to make menu choices! Lots of gold stars

We went to a concert at Birmingham Town Hall on Friday - Aker Bilk and Chris Barber.  Rod had seen both decades ago, and it seemed an amusing way to spend and evening and see how the refurbishment of this building had worked out. They have reduced the seating and made it light and airy - much better than when we used to go every week to see the CBSO and Simon Rattle nearly thirty years ago. 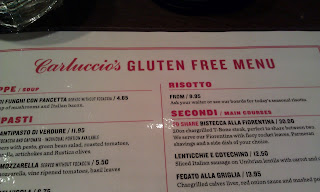 We ate at Carluccio's before the concert.  I said I was gluten intolerant..expecting to have to give explanations, but no, the chap whisked off and came back with an extensive gluten free menu.  It took me ages to chose what to eat.  I noticed that the rosemary potatoes Rod was having weren't on the gf menu so asked why.  They fry them in oil which has been used to fry other things - but they could do some in a separate frying pan if I wanted them.  It is usually quite difficult to get across the notion of cross contamination in a deep fat fryer so it was refreshing that the explanation came without having to do any form of interrogation. 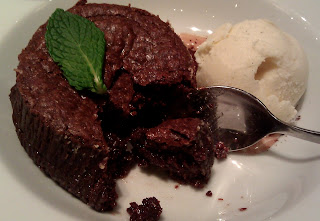 The meal was quite expensive £55 for two), but we had several drinks and both had desert (mine was a gooey chocolate cake/pudding made with almonds).  I would definitely recommend this as a special event restaurant...and no doubt we could have eaten cheaper if we hadn't been so delightedly piggy.
Posted by Lois Parker at 14:56 1 comment:

I tried my usual biscotti recipe but using my standard flour a while ago.  I didn't like it as much as usual; the texture seemed rougher than usual.  Making my first batch of biscotti in my new flat I decided to go back to my usual mixture of urid, tapioca and almond for the biscotti. I went back to my source recipe, biscotti all a mandorle, in the River Cafe Cook Book Green, by Rose Gray and Ruth Rogers.  As my new kitchen is tiny, and the oven is too small for my baking trays, I reduced the recipe to needing only one egg.  I made the mistake of not writing down the quantities I would need, and what with dividing the flour quantity in two and then in thirds for the three flours I use, adding dried blueberries and cranberries, and generally getting in a tizzy because I couldn't find where I had put things like sugar, I made a mistake in the ingredients.  I forgot to halve the sugar.

When I mixed the dough I found I needed to add water to get a formable dough.  This was odd, as usually there is egg left over.  However, I added a bit of water and just carried on.  The dough took much longer than usual to cook, but was getting too brown on the outside.  With double the cooking time, then cooling, slicing and rebaking, it did take quite a while, and my initial impression was that the biscotti was too sweet to be pleasant.

However, the biscotti have matured into a delicious soft and slightly chewy biscuit with bursts of tart flavour from the dried fruit.  Sticky, toffeeish, and very tempting....I am not sure if I will be able to bring myself to make this recipe exactly this way again, but made as a mixture which is dolloped in small mounds on a baking tin and cooked long and slow, it may well become a standard favourite.

Toast the almond flakes and pine kernels for a few minutes until just going golden.  Move onto a new tray to cool before using.  If you leave them on a hot tray they may scorch and will take longer to cool.

Mix all the dry ingredients together.  Mix the egg and use this to make a batter stiff enough to mould into a log shape.  Add a bit of water if needed.

Place on a baking sheet in a log shape- I use a silicon liner or parchment to make the process easier..  Cook for about 25 minutes at 150C. I found that caramel oozed out around the mixture.  Leave to cool, slice and return to the oven until they are fully cooked.

Place on a cooling rack.  Store in an air-tight container when cool.
Posted by Lois Parker at 20:23 No comments: