No, don't get excited, they haven't made a gf pasta dish or a safe gf pizza crust.  However, I ate there this week as Tolerant Tater really likes their pizzas, and, when confronted by a a need to eat and unknown restaurants that may well poison me and still not please him it is easier to eat there.
Two years ago I went to the Pizza Express place I ate at this week.  I asked about the ingredients in their salad dressing.  They wouldn't or couldn't tell me. I ate a bare salad.  A year ago I ate there and asked about the ingredients in the salad dressing.  They brought me the bottle to read.  This week I asked about the ingredients in the salad dressing.  The waitress said she would go check on the list of allergens and came back a minute later to say it was gluten free.
Pizza Express have also produce an allergen table available online.  It is a pity it doesn't list the salad dressing separately, as at first glance all the salads are unsuitable because of the bread/croutons etc.

They do have a column at the end that shows how to modify the dish to make it suitable for coeliacs, vegetarians etc.  This is helpful as it shows that they know that dishes can be disaggregated.

Just telling people to leave things off isn't  always successful.  I have had salads brought with croutons on after assurances no bread would go anywhere near them, and  a chunk of bread leaning up against my soup bowl.  I once ate at  restaurant, admittedly in Geneva, where I told them not to put the wafer on and I wouldn't accept the icecream when it came with a wafer and they got in a strop.  Just removing the wafer after it has been plunged into the icecream is not enough, any more than removing the bread sticks  or croutons from the plate of salad after plating is sufficient.
So a bit of progress, and I didn't get any gluten symptoms.  They clearly managed to keep their salad ingredients flour free as well, which is a bit of a triumph for a pizza restaurant.  I have finally bought some of that Glutenzyme digesting enzymes for occasions when I suspect cross contamination is likely. If this would help reduce the problems I get just being in regular gluten-rich environments like normal homes, even if I don't eat, that would be very useful. I know it will be tricky to be able to form a reliable opinion on its usefulness, but I'll post when I have tried it.
Posted by Lois Parker at 08:27 No comments:

I had a four day holiday to St Ives in early February.  I have never been to St Ives in the winter before, and was surprised at how hard it was to find anything to eat.  I had two 'Greek' salads, one made up of limp pizza toppings, the other fresher; both gave me some gluten symptoms. However, I also found a superb cafe that I would be happy to eat at every day of a holiday.

The  Porthminster Cafe is on the beach directly below the train station.  I walked down the very steep road from Tregenna Castle Hotel, where I had an off-season bargain self-catering apartment.  I wished I had skis as the little road went straight down the hill.  From the train station just walk away from the town along the beach.

This is the view from the cafe back towards the town.


The Porthminster Cafe has a fresh seaside air in its decor, it uses local produce and vegetables and herbs from their own garden.  They may have driftwood furniture and children's plastic buckets for wine coolers but they take their food and the satisfaction of the customer very seriously indeed.

I asked what I might be able to eat.  I find that a waiter's response to that question generally tells me everything I need to know about a restaurant and is a good predictor as well as to how likely cross- contamination of even a simple salad is likely to be.  I didn't get the equivalent of the 'can you eat bananas' response.  Instead, after saying that most things could be adapted, the waiter checked with the chef and came back with the two page savory menu covered in ticks and crosses (very few crosses).  Items were either fine as they were, perhaps with just leaving off a component like croutons, or could be adapted.

The menu in the winter is largely fish and shellfish 'from the ocean just outside our windows', but in the summer they have a full vegetarian menu as well.  I don't know how gluten free that will be, but I look forward to the opportunity to check it out.

I ate Cornish Hake Fillet with white bean cassoulet, chirizo, preserved lemon and saffron.  I chose this as I was curious to find out how the preserved lemon was used.  The food was served simply but with flair, and, apart from being too salty for my palate, was delicious. 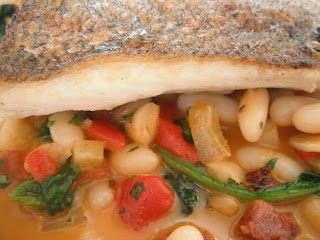 For desert I had a caramelised banana and cinnamon meringue desert.  I know meringue is the usual fall-back of people avoiding gluten, but this was a superb meringue, and the little banana pudding that appeared on Tolerant Taster's plate really wasn't needed.  The pistachio ice cream was delicious, although it didn't really enhance the cinnamon and banana theme of the rest of the plate.

I enjoyed every minute of this lunch, and didn't get even a smidgen of gluten from any of the items.  I completely recommend this restaurant for anything from morning coffee to dinner.  If they had been doing breakfast I would have tried that out, but it was a cold dark February.  Perhaps in the summer one could live in the cafe from dawn to dusk.
Posted by Lois Parker at 09:54 1 comment:

where has January gone? And, Hooray for Seville Oranges

anyone following my usual flurry of recipes and comments will  wonder at my silence.

I have been reorganising my Mother-in-law's house so that she can live downstairs following an accident.  If I tell you that she is the sort of person that has lots of hobbies despite being in her late eighties, only gave up driving 'the old folk' to their appointments in December for the local volunteer centre, and could host a formal dinner party for twenty with the correct cutlery for each course (what are all those individual types of spoons for? Pickle forks! Silver sugar tongs!) you can see that simplifying her house has taken a lot of effort.  About a hundred hours of effort so far and it is just as well she won't be able to get upstairs to see how impossible it would be to get into her bedrooms.

Add to that the fact that I have been getting glutened even though I have not eaten anything while at her house. Brain fog, disrupted and prolonged sleep, a gungy chest, colic....and today Tolerant Taster asked if I had hit my eye as I have a dark ring around the left eye as well as a general smudgy blue in the reappeared bags.  Haven't yet got my cold hands back - they would have been handy today as I was making chocolate truffles and Seville orange ice cream sandwiches.

The Slow Food Society locally is hosting a Seville Orange session this evening, so yesterday I gave myself the day off cleaning and sorting and played with these seasonal bitter oranges.  A chocolate, chili and orange cake (not as good as I would have liked, no time to repeat), Seville orange ice cream (yum) sandwiched in mini almond and orange cookies, white chocolate and Seville truffles enrobed (that is coated to you and me) in milk chocolate as I ran out of the white, orange fudge (pity I went to check how long to stir it for when it reached120F just as it set) a chili, garlic and Seville orange sauce I will try with grilled chicken - aiming at a barbecue style finish, a coffee and orange caramel.....I'll write up the ones that get good review later.  I had forgotten how the washing up mounts up when a serious cooking session is in progress.
Posted by Lois Parker at 14:01 1 comment: