More on the adventures with a deep fat fryer.  I kept getting emails saying it was international doughnut week or some such daft thing.  So, I made four types of doughnuts in one day.  Flour is my standard mix of urid lentil (40%), tapioica (40%) and fine cornmeal (20%)


While I was looking at a lot of doughnut recipes I came across some that used baking powder (referred to as ‘cake’ doughnuts by some), and those using yeast.  I also came across some that used both.  This seemed a strange idea, as I tend to think of baking powder releasing its leavening effect as soon as it gets wet.  If you read the excellent Alton Brown, who provides good information in a simple way about basic cooking chemistry, baking powder now has a two stage process where it reacts when wet but also when heated, so you get lift in the oven or hot fat even if you have a gap between mixing and cooking.

I tried two doughnut recipes using baking powder, both with sweet potato, then one with yeast.  I then took a yeasted recipe, and made it first with yeast by itself and then with added baking powder. To my surprise, in a blind testing, it was very obvious which doughnuts had the baking powder.  They were softer, more squeezable, and had a better mouth feel. You can see a more open texture.

I will be using this as my standard recipe.  I will try substituting vegetable oil for the butter, and leaving out the yogurt, so as to reduce the lactose, but I don’t expect it will make much difference as the amount is so tiny.  The yogurt adds acidity, which, according to Alton Brown, gives a higher temperature at which the batter sets. A squeeze of lemon would do this too.  He was discussing variations on cookies, so I don’t know if this will make a difference in the deep fryer.

*remember to use water that isn't too chlorinated - filtered or water left out to sit for a while is fine if you are in a high chlorine area.


Set fryer to 140C about ten minutes (I timed my machine, it got to 180C in six minutes)  before your doughnuts have finished their second rise.

Method
Dry ingredients
If you have yeast that goes straight into flour, whisk this into the flour with the baking powder
If your yeast needs starting in warm water, mix the yeast, half a teaspoon of the sugar and a little flour into warm (no more that 38C) water and leave to start frothing.

Mix wet and dry ingredients together.  It will be wetter than you would expect for a traditional yeast dough.  If you touch it lightly you should get a little dough sticking to your fingers.  It will get dryer as it sits as the flour absorbs moisture slowly.

Leave to rise.  If possible put in a warm moist environment.  I usually rise doughs in the oven with the light on and put a bowl of boiling water in the bottom at the start.  You will see the dough rise, but if you can't remember how big it was to start with, scoop a little out and you will see lots of bubbles in the batter.

Take small handfuls of the dough and shape into a ring by pushing your thumb through the middle.  This saves you trying to roll and cut the dough, or having to pinch ends together if you start by making a sausage and joining.  I use the same technique as when I make bagels.  With gentle handling this soft dough is quite easy to work.

Place on a floured tray and let it rise for a while, until you can see that they have grown in size.  Place in hot fat until browned, turn over and cook second side.  Shake the basket gently when you first put them in to make sure they don't stick to the basket. Drain on a cooling rack.  Roll in sugar while warm, or ice when cold. 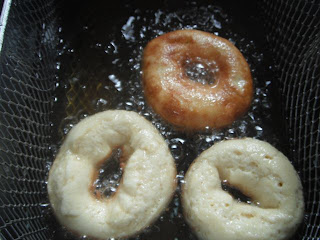 TT, who occasionally buys doughnuts at train stations said these were better than the ones available from these chains.  I suspect if you served them to people they would just be amazed that you had made doughnuts and not even think that they were made from unusual and gluten free flours.

I didn't have a proper attempt at filling them with jam - I think a syringe would be helpful for this, making the dough easier to handle.  However, I also have a plan to try freezing neat blobs of jam which could then be pushed easily into the dough, thawing as the doughnut cooked. If I get around to that I'll let you know the results.