Gingersnaps -made with vintage marmalade (gluten-free and dairy-free)

We have been clearing the house and barns as we are trying to sell the house.  We came across a stash of marmalade so old it has to be called vintage - from 1999.  It wasn't hidden away - it was primly stored on the preserves shelves, but I like sprightly fresh marmalade and this just kept being ignored.  The seals were still good, and I had to use my jar opening device to get the lid off. 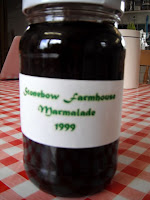 This morning I sorted out my spices.  I have lots of different types of herbs and spices, and buy frequently-used ingredients like cinnamon and cumin in large quantities.  The new house will be very small, so I was trying to think how to reduce the space needed - and this meant decanting spices, and soon the kitchen smelled enticingly of ginger.  So, gingersnaps became necessary.

I read several recipes, one using applesauce instead of fat, some egg free, others full of butter and syrup.   With the supply of marmalade that needed using up fresh in my mind I decided to make cookies where the marmalade took the place of the sugar and treacle and quite of bit of the usual fat.

I made up a batch of the batter, then baked a single cookie to test the flavour.  I added more spice and sugar at this point, and produced a cookie that is delicious, crisp on the outside and chewy inside, and that has a warm complex slightly bitter flavour, with the deep caramel of the marmalade complementing the spice.

TT has been in several times and snuck the slightly odd-shaped, smaller ones off the rack.  He can eat as many as he wants of course, but the temptation to keep coming back for more of the 'very grown up biscuits' as he puts it, is a good sign that they are something to make again.

Put spoonfuls of this stiffish but still sticky batter onto granulated sugar, roll to cover, then press flat, placing on a baking sheet.

Cook at 175C for about ten to twelve minutes, keeping an eye on them.  I cooked mine until the edges were just turning brown.  Cook at a lower heat for longer for a crisper biscuit.