I don't really miss foods as I am so relieved to be feeling well.  However, if I had to spend the rest of my life without eating jellabis I would be a bit sad.  These are the syrup filled swirly sweets you see in Indian shops.  I made some many years ago, and had a go at these the other day.

This is a first attempt and I didn't follow a recipe so I do need to work on it, but the resulting morsels had the right flavour and texture, they were just the wrong shape.  So, I am confident that next time I could get it right.

The original way to make jellabis is to let your batter self-ferment the same way you would make dhosa.  I added a bit of baking powder and a bit of yeast as I wanted a quick result.  I also left out the yogurt as I have a problem with milk - I am realising after my experiments with lactase that I am probably not just lactose intolerant but also mildly allergic to milk proteins.

The dough needs to be dispensed into the hot fat to make swirls, and I now realise I should have made a a dough that needed to be extruded rather than just dribbled (I filled a funnel and kept my finger over the end...not the easiest option with such a runny batter).

Once the batter has turned golden brown, drain it on  kitchen paper then immerse in hot syrup.  Drain on a rack and then eat.  I like these left for a while to develop a good crisp outside to contrast with the syrup inside, but some people like them still hot. 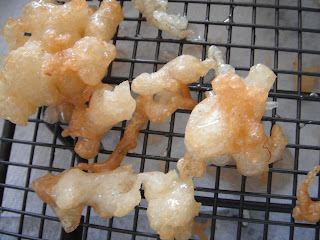 mix to a smooth batter, leave to rise until you can see it has expanded

Use whatever flavouring you want, traditionally it is cardomon.


I very rarely deep fry, but had a large container of sunflower oil in need of using up.  I made a sequence of things like these jellabis and pakoras so that I could make best use of the large pan of oil.  I don't like the smell of deep frying, but will have another go at making these properly for a special event sometime.  Do, however, go ahead and make jellabis with the gf flour - they should work fine.
Posted by Lois Parker at 16:04