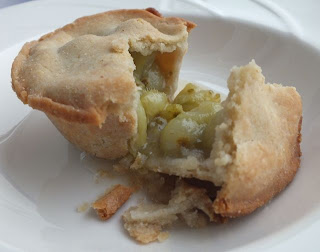 I have been trying my first attempt at a tapioca and corn free gluten-free flour.  The one I am using at the moment is one third each of urid lentil, brown rice and buckwheat.  It makes good pancakes, but they are very easy with almost any flour.  Pastry is more of a challenge, and I wasn't expecting much from this mixture - I thought it might not hold together and it might not be crisp, or it might taste so strongly of the buckwheat that it would affect the flavour of the fruit filling. 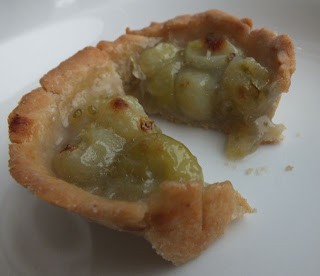 I made a tiny amount of pastry to test, just using the scrap of butter I had to hand.  It made enough for two small pastries, made in a cupcake tin.  One was double crusted, the other open.  The filling was some frozen gooseberries, defrosted and mixed with sugar,

Cut butter and flour together then add chilled water to make quite a damp dough.  I thought I had added too much water to start with but after a little further mixing the dough became well behaved.  I didn't even leave it to rest before rolling.  I took slightly more care lifting the rolled dough than my usual recipe, but in general it was well behaved.  It kept its shape well in baking and when cooling, not shrinking away from the tin or the joins. 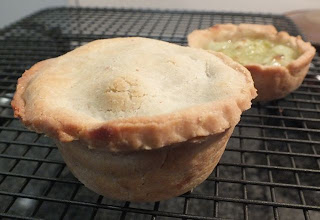 The piecrust was delicious, crisp and light and suitably complemented by  the tart sweet filling. 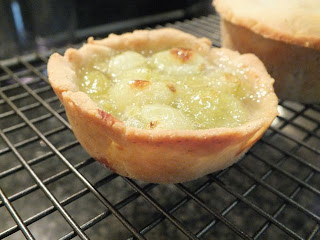 For those of you not used to English gooseberries who are shocked by the sight of prickles on the fruit in the first little pie - don't worry, they go soft and so aren't noticeable when eating.