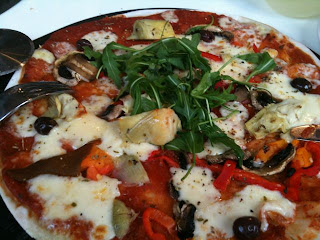 I haven't tried Ask Pizza for quite a while, and the last time I had a very mundane gluey gf pasta as the only safe option.  Today I visited Ask Pizza in Lichfield, and was pleasantly surprised to see they have got a fully labelled menu with plenty of choices.  I tried a pizza and also had chips as it was a pleasure to be able to.  The chips were crisp on the outside though a bit pasty in the middle - I suspect the very bad summer weather has made it harder than usual to get good potatoes for various uses.  The main thing was that I didn't have to go through the rigmarole of how do you cook you chips with staff that had no idea why I was asking. 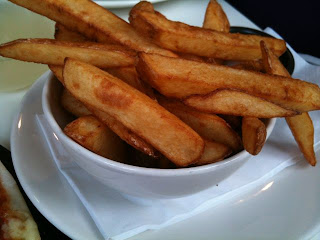 The pizza came on the same type of flat object that the ordinary pizza came on (not a plate and not a slate...don't know what to call it) and with an identical pizza roller, which worried me slightly.  It was, however, very obviously the gf option as it looked more like a thin flatbread than the wheat pizza.  It was excellent in that the base didn't suck all the flavour out of the toppings the way the Pizza Hut pizzabase did, further enhanced by generously applied and flavoursome ingredients.  It would have been better if the base had been crisped up a little on a hot griddle, but I was told that would be too hard on top of all the other avoiding contamination activities they needed to do.  I find my own pizza bases benefit from a blast of bottom heat to avoid a stodgy bottom.

So, full marks for a clear menu and plenty of choice.  Pity I couldn't find out what the ingredients were. And I haven't become ill, so their anti-contamination processes were effective.
Posted by Lois Parker at 21:49