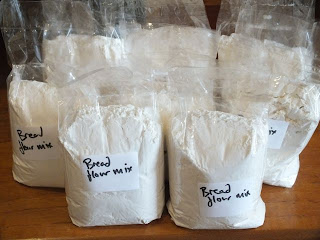 I am spending part of the summer in my campervan in Cornwall.   For three days I will be on a painting course in Newlyn, and for a week I will have my sister staying with me.  I thought that bread would be helpful for picnics- which means making sure I have plenty of my own flour available.  I can eat M&S bread as it doesn't have any xanthum gum, but I find it doesn't hold up well for sandwiches.  I did finally find one of their ready-made gf sandwiches at a motorway service station the other day, and bought it even though I had to remove the cheese.  That did seem to hold ok, but it was packed in a protective plastic holder. 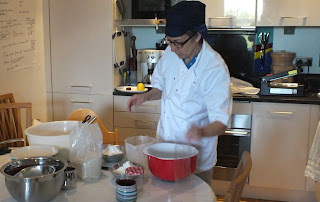 So, as part of my summer packing, this morning I ground two kilos of urid lentils, and mixed the resulting flour with two kilos of tapioca flour, and one kilo of brown rice.  I also added 2% of the Solanic 301 potato protein, which makes gf breads work so much better.  It stops them slumping once the get over a couple of inches high, and improves the texture.  My usual supplier of urid lentils is now offering urid flour that has not been packed in a facility that also handles wheat, so when my current supplies run out I think I will switch to ready ground flour.  That would make travelling a lot easier, as well as reducing the need for me to travel with multiple packs of unlabelled powder; having had the campervan stopped and thoroughly searched by French Customs once in the middle of France on our way back from a Surprise 60th Birthday in Geneva  I prefer not to look suspicious.

Once mixed I bagged the flour in 300g packs and heat sealed it.  This will allow me to make a small loaf (1lb tin) with ease by adding a teaspoon of yeast and enough water (about 250ml) to get a sloppy dough, leaving it to rise and baking in the campervan oven.  It will also work for flat breads like pizza, which bakes great on the barbeque. 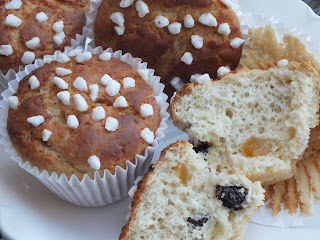 I had 130g of flour left over so made four pannetone flavoured buns, with the peel and flavouring I got from  BakeryBits. 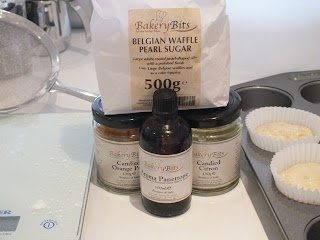