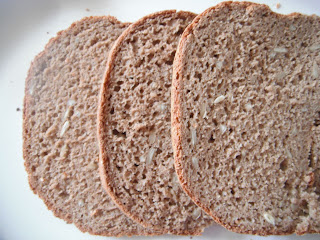 I have been working on recipes/mixes which are suitable for people who are busy or not confident in baking. The plan is to have these recipes worked up so that when my flour mix is produced by Shipton Mill next month the recipes are available.

One of these is bread using a bread machine.  I bought a Panasonic bread machine last week.  The first test this morning produced excellent bread.

I used the rye setting rather than the gluten free setting, as it seemed closest to the timings I would use if making the bread by hand.  The first test produced a short loaf - the ingredients are sufficient to make a loaf in a small bread tin, and the container in the bread machine is large.  I'll run tests with other quantities later.

I had hoped to be able to mix the ingredients before the initial waiting time - all the recipe have this dormant period at the start - I don't know why.  I would normally let my ingredients sit for hours before shaping as this improves digestibility - I use processes similar to making sour dough bread. However, there didn't appear to be a button you could just press to activate the stirring action, so I rather awkwardly stirred things together with a silicon spatula.  Next time I would just mix all the ingredients first in a bowl and then pour into the bread pan.


I switched on, peering in every now and then.  I worried that the dough wouldn't be mixed as it is more of a batter and the rotating blade doesn't reach into the corners of the bread pan.

I worried it wouldn't rise properly, especially since I used the kind of yeast that should really be started off in warm water for ten minutes before adding to flour and I just chucked it in with the rest of the ingredients.  I worried it would stick to the paddle - after all it gets baked with the paddle still in the bread - so I added the teaspoon of oil and stirred it in.  I worried.


After three and a half hours the machine went ping and I lifted out the loaf.  A few good shakes and the loaf came out of the tin and the paddle stayed attached to the tin and not stuck in the loaf.  The bread was an even texture and well risen.  The texture was moist. The flavour was delicious - haven't tried the teaspoon of cocoa before but it helped give a warm flavour and 'wholemeal' look.  Cocoa without the usual sugar and milk products is good for you - full of anti-oxidants, so I figure it is fine in a wholesome loaf.