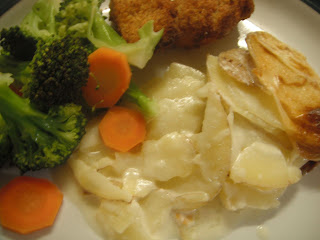 I have been continuing the tests of treating channel island milk with lactase for use in cooking. I just put the six drops of lactase in a litre of milk, shake, and leave in the fridge for 24hours before use.

I took 2/3 litre of treated milk (it is 5%fat) and two large baking potatoes.  I sliced the potatoes thinly, leaving the skin on.  I cooked the potatoes in a saucepan with the milk until they were nearly tender.  I then put them in a dish and baked them at 180C until the top went brown.  I put a little bit of sea salt in but no garlic, as I wanted to assess the impact of the lactase on the flavour. 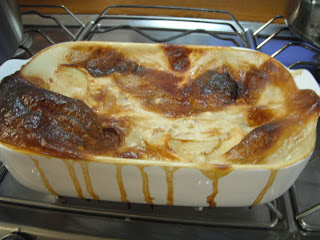 I served these with the breadcrumbed chicken I posted earlier and some vegetables.

The potatoes were delicious though sweeter than usual.  A bit of garlic would be a good complement and make it obvious this wasn't intended as desert.

I ate lots as I wanted to find out how effective treating the milk with lactase was.  I did have a little colic for a few minutes the next day, but given that I ate an enormous portion to see what would happen I think this is pretty amazing.  If I had eaten a quarter portion made with normal milk I would have been out of action for most of the next day.

So, a thumbs up again but avoid gluttony.
Posted by Lois Parker at 11:17