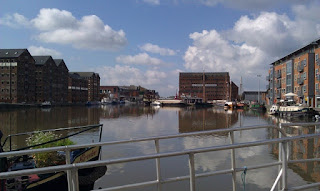 I generally avoid food festivals.  An odd thing for someone obsessed with food, who cooks all the time and is on the committee of their local Slow Food group.  However, food festivals are full of food, and often food that has escaped from packaging and rampages around in people's hands.  How much of that is likely to be gluten free?  Pretty soon every surface has been handled by people who have touched the bread used to dip in fancy oils and vinegars, nibbled the biscuits and cakes, wolfed down pies and pasties.  Dangerous places, food festivals.

I went to this food fair as it isn't too far away and it is the first in that venue.  I booked to see food demos early on the Friday, assuming that it wouldn't bee too full and I could get around safely.  The place was pretty much deserted, so I was right on that assumption.  On the next day, a sunny saturday at the start of the school holidays, the place had a lot more people.  Add to that the TV stars were giving demos, and that meant that the whole large demo tent was filled.

I saw Rob Rees, a campaigner for good food in schools, food writer and chef.  He was clearly competent, managing the audience and his cooking with ease.  He used the demo as a chance to give a lot of food advice.  The organiser with the microphone did nothing other than introduce him.  He cooked salmon, blanched vegetables and salad.   His other dish was steak, crushed potatoes and a red wine  sauce.  Most of the vegetables came from his garden, and he explained his choices for each ingredient. 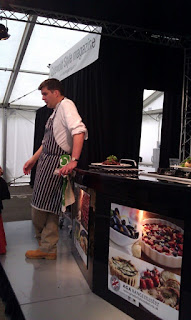 The second chef was Rob Owens, head chef at a restaurant called Monty's in Cheltenham.  He seemed completely focused on his cooking and didn't chat.  The organiser seemed to feel it necessary to ask questions and run a commentary.  I didn't stay for very long.

The third one, on Saturday morning, was Gino D'Acampo, a TV chef.  He worked his audience with great ease, and managed to introduce sex at almost every point of the event.  He is a very pretty young man with a great deal of flair, and the adulation from the crowd was palpable. He cooked linguine with Gorgonzola and chicken, and a chocolate and cream desert (helped by a young audience member).

The fourth person was Stacey Stewart, who is a Masterchef finalist and runs her own bakery in Sunderland.  She was well organised, informative, got the audience to interact with the making of the food.  She asked for a tall person to help, and got a man who looked like the BFG, to stir her risotto constantly for fifteen minutes.  Five people to try poaching an egg including two children.  She cooked smoked haddock risotto with poached eggs and black pudding.  She also got the participants to wash their hands before handling the food.  She didn't kiss any of them.  The organiser went around the audience with the mike getting questions but didn't need to coax or fill in gaps. 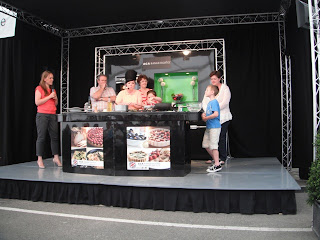 Whilst it would be nice to be as popular as Gino I think that route is unattainable for me!  I did think that Stacey's style was comfortable and considerate, and she is the closest to a role model for me on these demos.  Rob was very good but he did feel a bit too pushy with his message - and his statement that if you eat grapefruit when you take statins it will kill you was definitely extreme!

I still think I would like to do demos.  There are clearly issues of getting timing right, and baking would be harder that other types of cooking.  You need to structure the activity so that there is always something happening. You have to put up with cooking if only one person comes to watch.

I did learn one useful tip by careful watching. Pile all the chopping boards you need on top of each other in the order you need them.  Then you can simply discard them one after the other and keep the cooking process smooth and neat.