Cakes delivered to the wedding venue on a morning of rain and thunder.  Went back to the church a couple of hours before the ceremony, and I donned my bakers hat, blue disposable catering gloves and my apron.  I didn't check that my mother had managed to take a photo with my camera...so no photo of this funny garb available.

The purple cupcakes towered high and spread around the stand.  Even in the gloom the purple shows up well, but the topping didn't sparkle as much as I hoped.They were at the back of the church, with coffee and other drinks being provided for the end of the service while the formal photos were being taken. 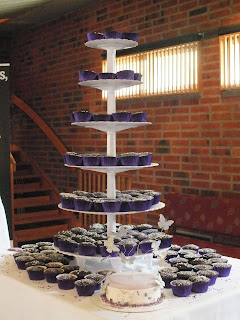 The top cake was moved to the dining area to be the cutting cake late in the evening, rather than perch it on top and move it later. 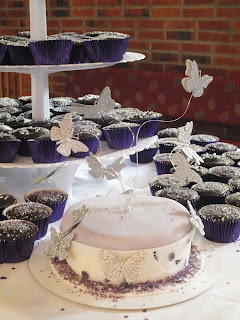 The groom looked calm and elegant, waiting for the bride.  As she approached the door, seen through the glass windows, I, as the true psychologist I am, turned to watch the groom catching his first sight of her and he looked close to tears, which, manfully, were controlled.  Heidi always looks lovely, but in her simple gown and off the face veiling trimmed with diamante she looked stunning.  Three jolly flower girls and three elegant bridesmaids - it would be hard to imagine a prettier sight.

The service was conducted by the groom's father, seen here with Heidi and Danai as they turn to be greeted as a married couple. 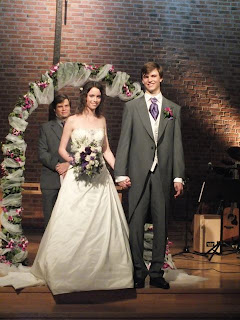 Of course I wasn't the only one that made use of this photo opportunity. 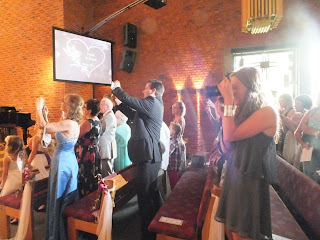 I kept a close eye out to see if the cakes were considered ok.  I once got told of a cupcake tower for a wedding where all over the place were pretty cupcakes with just a bite out of them.  No sign of any of that at all, I am please to say, and I finally tried one myself and thought they were delicious. I didn't get many good shots of people munching as the light levels were low and my camera is large and therefore difficult to get surreptitious photos with.  I did like this one of the stack being built. 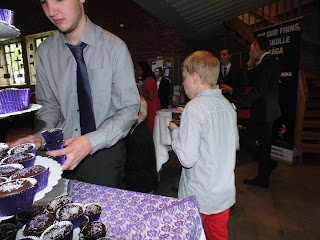 You can also see that my mother wasn't completely fed up of chocolate cake after spending the previous three days with me in cake mode. 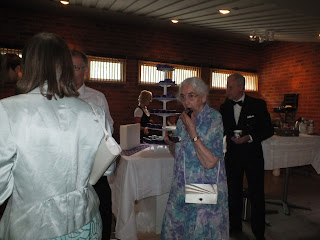 Even with cupcakes and a mulit-cultural dressing up booth the gap between wedding and meal feels very long for some. 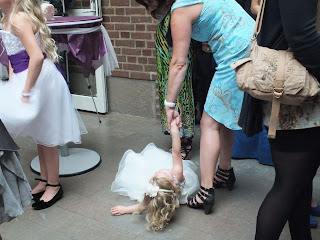 There were some formal photos taken in a break in the rain near the church, and then more in a garden elsewhere. 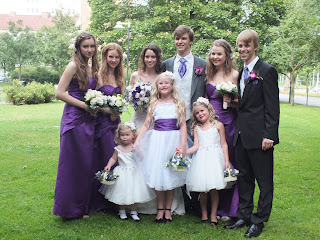 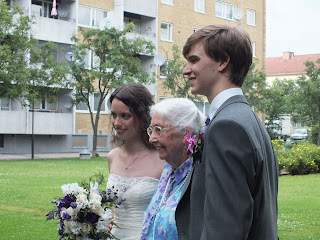 The grass was wet and soggy and high heels were a menace.  Plenty of shots of bridesmaids barefooted, skirts hoisted. 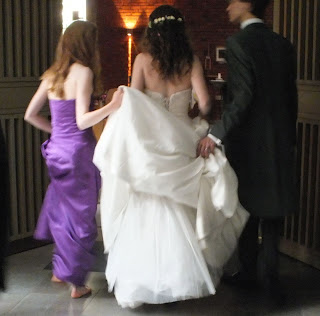 I got included in one shot - so asked for my camera to be used.  About to include the one where I was looking the right direction but it has vanished completely, so here I am, tacked onto the nd of the row.  I was paying attention. My purple flower was excellent and went with the cupcakes beautifully, but hats are clearly not normal garb at this sort of scanidnavian/mulitcultural event. 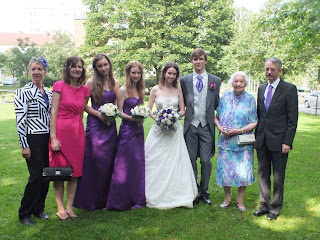 I have some charming movie of a bubble and confetti welcome back from this which I will extract some still photos later. 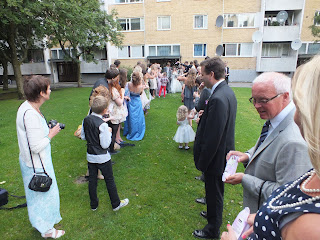 I took my own meal, even though the food was almost all gluten free and the two items that weren'te were clearly designated.  This was suitable for Heidi, and also another aunt of hers, her mother's sister, who says she even shares a wheat bread toaster.  I could tell I was getting a bit contaminated even with being scrupulous, and took four glutenzymes over the course of the event to keep the discomfort down. I left about nine, with lots more acting, singing, dancing etc to go. Had a leg cramp in the night but otherwise ok.

Back home, greeted by the sight of an empty dresser. 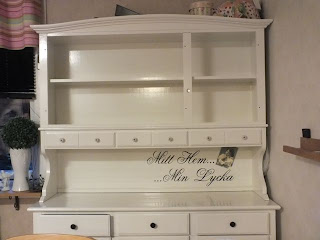