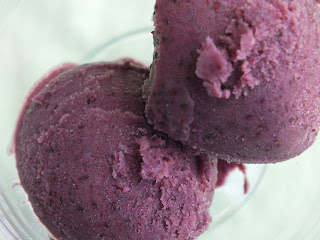 I have a lot of dried blueberries left over from baking fruit cakes.  I've been experimenting with frozen yogurts, made with milk I pre-treat with lactase to reduce the lactose in yogurt still further.  This fro-yo was made by cooking the blueberries in water until they were soft, blitzing in a blender, sieving and then mixing with the yogurt.  This makes a high-fibre, no added sugar frozen yogurt.

agave syrup to taste if needed

Cook the blueberries in the water until they are soft.  Blitz - it will produce a very thick puree.  Sieve to remove the blueberry seeds.  Leave to cool.

Stir the cooled puree into the yogurt with the vodka.  If you don't want to use any alcohol you will need to remember to get the yogurt out of the freezer a few minutes before you want to use it.  The alcohol acts as an anti-freeze, making it scoopable straight from the freezer.  Check the flavour.  If you want it a bit sweeter, add some syrup.  I use agave for its slow release (low GI) qualities.

Icecream guides recommend that you leave the mixture in the fridge for a few hours before putting in the ice-cream machine.  Process until the mixture is thickening and then put in a plastic tub in the freezer.  Remember to label! 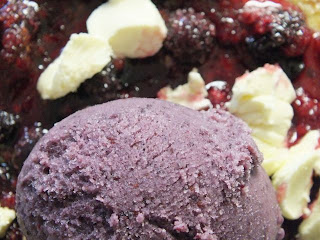