Day 2 - enjoying breakfast and laying down the rules 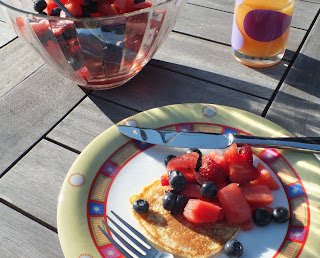 A good night's sleep - aided by my hanging counterpanes over curtain rails and the bit of exercise kit in the doorway.  There is a lot of light and it is there most of the night.  I am sleeping upstairs in the office, which also has the boy's (grown-up) toys - the pull up bar in the doorway, the electric guitar and keyboard, and a wonderful immense and height adjustable desk - perhaps one of the owners works from home.

Started the day well- spotted a food mixer in another cupboard, and it has a stainless steel bowl.  Challenge to figure out how to lift the mechanism to release the bowl, but got there in the end. It is quite small, but it will do as a clean mixing bowl from now on.  Made pancakes, struggled a bit with the very slow stove, but served with a fruit medley of watermelon, strawberry and blueberries, they were lovely.

I had bought a jar of red jam in my dash around the supermarket yesterday.  Didn't know what it was, so looked it up today.  The word 'Hallon' just didn't ring any bells - turns out it is raspberry.  The wonders of having wifi and the online translators.  'Rabarber' seemed likely to be rhubarb, and I could indeed see pieces of rhubarb in the jam.  So, rhubarb and raspberry - a bit odd as a combination as I think of rhubarb as a very early season crop and raspberries as one of the later summer berries, so unlikely to have a glut at the same time.  It tastes delicious, but not likely to become a home-made essential.

We have been trying to figure out how to say 'thank you very much'. The groom's grandfather tried teaching it to me yesterday in the car, but it seemed a long collection of clackety sounds and I just couldn't get it.  Looking at the spelling on the computer this morning hasn't helped.  'Tak' may be casual and informal, but that will no doubt be better than nothing at all.  I found myself falling back on french in the supermarket when I wanted to get by people - how daft is that! My extremely minimal southern European languages aren't going to be much help here.  I tried talking to the builders who are renovating this house (presumably they are doing something else this week while we are here) as I wanted to find out why my mother's bedside lights didn't work.  They were German, spoke no English, couldn't understand the perfectly adequate french sentence I came up with, couldn't get the miming...not their problem I suppose.  Gave up.  Enough light from elsewhere in the house and no door anyways.

My cupcake trays will only fit in the oven one at a time.  Even though the oven is very wide it is about 5mm too narrow to take two side by side.  It is too short to take them one above the other. There is only one grid shelf but I found two large solid oven shelves in the drawer under the stove.  Took a bit of opening as you have to lift and tug at the same time, but I could use these to slide the cupcake trays onto, and keep one at the top to stop stray old food falling -I couldn't clean the roof of the oven because of the elements and there are loose particles there.  If I did that I could use the oven grid as the cooling rack.

Continuing well; took two glutenzymes to cope with all the food being eaten in the airport and the plane, and one in the evening here, but certainly manageable levels.

And the ground rules?   Well, I don't want my mother to do anything unless I ask her to.  She can have a holiday.  I want to do all the washing up, getting meals, cleaning.  I feel better that way.  Fortunately she says she is happy not to have to do anything unless asked to, so that is fine.
Posted by Lois Parker at 08:14