The day before flying - making convenience foods for a week 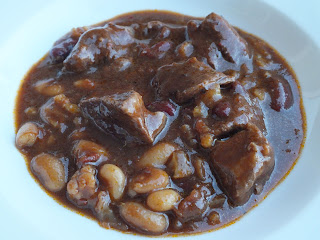 I spent yesterday evening making convenience foods for Rod for the week.  Before you get outraged at the idea that he cannot cook for himself - that isn't the case.  However, as part of keeping the house gluten free I try to have lots of tasty food handy so that the lure of the takeaway pizza doesn't become unbearable.   He is planning to spend the five days getting another novel out of his head and into the computer.  The first all the way through story telling is best done in undisturbed isolation.

So, the produce from the farm shop has become six portions of barbecue-style chicken, five portions of spicy beef and bean stew, labelled and frozen, plus other meals over the last couple of days and plenty for today when my we fetch my mother.  We need to leave about three am, so we will collect her from Birmingham this morning.

The little plug-in induction hob came in useful.  It heated my large cast-iron casserole dish very rapidly with its large load of beef and beans, before I put it in the oven.  It only cost £22 so I wasn't expecting much, and trying to make pancakes in our usual frying pans yesterday wasn't very successful - they buzzed and rotated while cooking.  However, using my excellent heavy cast iron skillet this morning produced good results.

Only jobs left are to sort out the final packing - my clothes need to go in my mother's suitcase, and to convert the chicken carcass into stock.

I have had a reassuring email from the person whose flat I am renting, so I know things like how to switch on the tv and the wifi code, plus a pleasant walk through a park to the town centre.

My cupcake carriers are stuck at customs with an address query, but the future MIL will sort that out for me today.  The car was serviced yesterday, so really shouldn't break down on the way to the airport.  We are driving in the very early morning so shouldn't get stuck in traffic.  We are being met at the other end by the groom's grandparents....oh, must remember to print out the recipe for the cake!  I tend to just look things up on my blog when I need recipes, but just in case, if the wifi doesn't work..best to have a hard copy.  Good to show airport security too, if they find my odd load of stuff in the suitcase hard to comprehend.