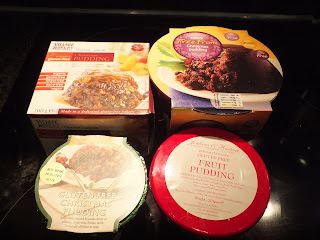 Four Christmas puddings to try at once.  They are very different, surprisingly so.  I microwaved them all, after being a little peeved that the instructions on the Jenkins & Hustwit (J&H) one said to 'microwave according to instruction manual'.  Who has their instruction manual to hand?  I just cooked it for the same time as the Village Bakery (VB) pudding which was almost the same size.

The Village Bakery pudding offered a choice when cooking - to add either a teaspoon of brandy or fruit juice before cooking.  I thought that was a nice touch.  This was 200g. £3.99

All the puddings released easily from their tubs after heating.

Flavour and texture:
V&B: this had a waxy damp look when it came out of the tub.  When I cut it large pieces of fruit were visible, and it cut a bit messily - fine for a pudding.  I thought the initial flavour was citrusy but Rod thought it tasted of chicken - a bit odd for a vegan pudding. After the first burst of flavour I was disconcerted by the odd grainy texture.  We wouldn't buy this again.  I regard Village Bakery as a company that makes good products, and visually this was inviting with the pieces of peel and nuts showing, but the flavour and mouth feel were not good.

J&H:  This pudding had a dry look when taken out of its tub.  It cut very neatly.  I didn't like the odd aromatic flavour.  The texture was good, light and not cloying, with all the fruit part of the pudding rather than distinct pieces.  An acceptable pudding.

M&S: This pudding is damper than the previous two, with a good rounded dark spicy caramel flavour. It had distinct pieces of fruit and nut but they were not intrusive.  It was not cloying or gritty, though I did have something hard in mine- perhaps a bit of shell?  A pleasant pudding I would be happy to take to an event - being a single portion makes this useful as a 'handbag food'.

Tesco:  This pudding looked shiny and damp when turned out of its pot.  It had a slightly bouncy gluey feel to the knife compared to the M&S pudding, but it has a moist and pleasant mouth feel.  It isn't claggy or gritty.  It has a good, well rounded fruity, citrus, spicy flavour.

We found it hard to choose between the Tesco and M&S pudding.  I think it would depend on how many people I wanted to feed more than anything else.  I marginally prefer the Tesco pudding but if I wanted one for myself only I would certainly buy the M&S pudding. Checking the prices I see Tesco Free From also do a double pack of 100g pudding for £2.50.

Neither of us liked the other two - I think they will find their way to the bin rather than the fridge after this test.

So, the winner is Tesco for this household. 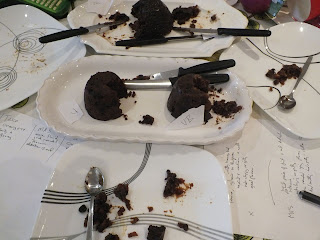