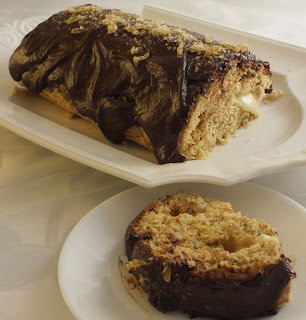 My mother-in-law is coming for Christmas lunch.   She doesn't like Christmas pudding and she doesn't like pastry (I was feeling tempted by a spicy apple pie).  She does like ginger chocolates, so much so that they are her standard Christmas and birthday gifts from her grandchildren, and a mother's day gift from me.  She allows herself one a day, and these gifts last her most of the year.

So, desert.....seemed like a ginger Swiss roll coated in chocolate so that it looked like a chocolate log would be traditional, festive and a good flavour combination.  Only thing is I don't think I have made a Swiss roll since I gave up gluten.  I made a light gingery sponge using  this recipe from Woman and Home, unusually for me I didn't even look at any other recipes.

The recipe is very simple.  The cake is mostly air, so it probably isn't worth trying to make if you don't have a stand mixer, or else accept that it will be a little less fluffy.

Crystallised ginger shreds for the top if wanted

Mix the eggs and sugar until they are light and fluffy.  This only takes about a minute in a stand mixer, but the recipe says do it for ten minutes until the mixture holds its shape when you lift the beater.  I kept  stopping and testing and.....and it did get a bit stiffer but not like a plain meringue mix.  Put the machine on full pelt somewhere safe and go do something else if you can bear to.

Mix the flour and spices together.  I whisk the mix rather than sieve as it is less effort and seems to work well.  Gently fold the flour and spice mixture into the egg and sugar mixture.  Try not to deflate too much so don't beat the mixture.  When reasonably well mixed spoon carefully into the prepared cake tin, smooth into the corners - it is quite stiff and sticky so it won't fill the tin by itself.

Bake at 180C for about fifteen minutes until just beginning to brown and just firm to the touch.  Lay out a piece of baking parchment bigger then the cake, sprinkle with sugar, and turn the sponge cake out onto this.  Remove the lining paper. It is a bit awkward, but any cracking can be hidden by the icing.  Roll the cake up immediately using the baking paper to help tuck the cake in place smoothly.  Don't include the paper in the roll. Place the roll seam side down on a baking rack and leave it to cool completely.

When cold, unroll gently, spread on filling and re-roll.  Spread chocolate icing over the whole surface and decorate in whatever jolly fashion you choose.

Filling
Melt butter, add chocolate and stir to melt over low heat, chop the crystallised ginger into thin slices and add with other ingredients.  Spread on cake while the icing is still warm.  Re-roll cake, wrap paper around cake as you roll and leave to set.


The photos were taken a bit too soon so the icing was still a bit liquid even though cold.

I found this cake a bit too sweet for my taste.  If I made it again I would add extra ginger to the cake mix and some plain cocoa to the final icing.  My taste tester thought it didn't need cocoa when tested before icing, but agreed it would be better when trying the finished cake.  This would be good served with ginger ice cream.

The original recipe had a creme fraiche filling and this would be both more tart and lighter than the butter cream icing.  If you can manage the dairy this would probably work better.

The sponge cake worked well, with some cracks in the top but it held together. 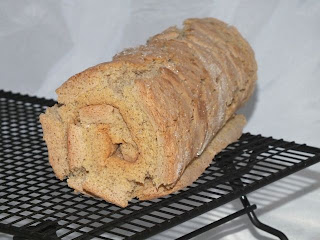 After it had time to set properly the flavour had also matured so that the ginger in the cake and icing became more obvious- a very good cake that got compliments from the ginger-nut it was intended for.  It sliced cleanly and thin slices held together well.