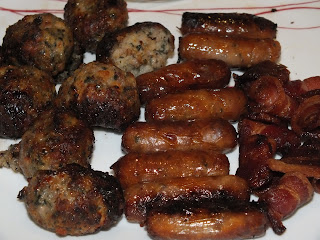 I noticed this box of stuffing balls, bacon rolls and cocktail sausages in the freezer section in M and S.  Missing out on the stuffing and just being given plain turkey and vegetables (often without gravy) is a standard complaint at this time of year - too many work Christmas lunches just leave us feeling annoyed and left out.  One person wrote that their piece of turkey had the hole in the middle where the stuffing had been removed, despite the catering team having been given ample notice.  This would mean that the turkey wasn't safe to eat.

I cooked these according to the instructions but think that left them overcooked.  When 35 of the specified 45 minutes are finished check to see if they are done.  I would also recommend placing baking paper on the baking pan as I found they stuck to the tin.

The stuffing balls were tasty, good consistency, and not cloying or overpoweringly flavoured.  They are made with rice flour, chickpea flour and cornflour. The sausages had a good balance of flavours and were neither bouncy or bready. The bacon was crisp and well flavoured.

This little pack of 'garnishes' makes giving people a full plate of goodies to go with their turkey very easy.  Highly recommended.