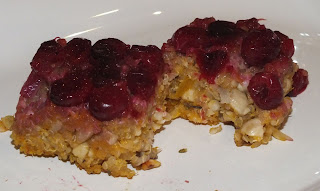 It is always a good idea to have an alternative to turkey as people may be vegan, vegetarian, pescatarian or just not like turkey.  I had a look at a few recipes on the internet, including the useful evaluative series at the Guardian. I wanted to use roasted butternut and cashew, so also looked at the River Cottage nut roast.  I also fancied including cranberries, and found this pretty-looking recipe from Jamie Oliver.  I wanted this dish to be a complete protein source - it seems to me that too often the vegetarian option in restaurants hasn't thought through either the flavour balance or the nutrient balance.

I made two versions, I'll post the second, including mushrooms, later.
I cooked a whole 300g bag of qunioa, rinsing thoroughly first, to make both recipes.
I cooked 300g of fresh cranberries for a couple of minutes with the juice of a satsuma, 1tbsp sugar and 1 tbsp chilli jam.  This was used in both recipes.

Mix all the ingredients and check seasoning. As you stir the mixture the butternut squash pieces will break up  If any are too large just cut them. You want a mixture with some contrast but no large lumps.

You can eat this as it is to test or fry a small blob to give a crisp outer to test what it will be like when baked. You may well want more salt as I eat very little (just enough to stop my tendency to low blood pressure). You may also want to reduce or remove the cumin if you don't like its distinctive earthy taste. Try some sage as an alternative.

Place a layer of the cranberries in the bottom of your dish and pack the quinoa mixture on top.  I used individual baking cases - the sort often used for lemon drizzle, as some of these are being given away.  I made eleven individual nut roasts from this mixture, filling the containers to just below the surface. Drizzle a little oil on top to help it go crisp and brown when baked.


Bake in the oven with other things you are cooking for about 20 minutes.  These can be frozen; just get out of the freezer a couple of hours before you want to cook them if they are the individual size. These tiny individual portions are easy to tuck in next to other items.  Leave them to rest ten minutes before serving.

This nut roast has a light flavour and slightly crumbly texture.  It would go well with the other traditional items on a Christmas dinner.  Just remember to have some gf vegan gravy to go wit it.