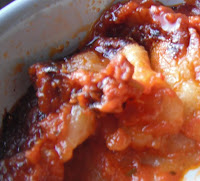 I made ravioli, which I wrote about in the last post.  I had a little pasta left over so I thought I would find out how it worked as lasagna.

I made thin sheets of the dough - made from tapioca gel and urid and tapioca flours, by pressing between damp layers of cling-film.  I wanted to know if this needed to be pre-cooked or not so I did two tiny lasagnas, layered simply with the tomato sauce left over from a previous meal, and just a little cheese on the top.  I used lactose-free cheese for the texture and a tiny bit of Parmesan (I can cope with a little dairy) for some flavour as the lactose free cheese doesn't have much taste at all.

For the first lasagna I simply interleaved sauce and sheets of the pasta.  For the second I pre-cooked the past sheets for two minutes in boiling water, and then layered it with sauce.  The photos don't really look very much like lasagna as this was a functional test and not a properly balanced layering of pasta and suaces.

I baked both at 180C for twenty minutes, until the cheese on top was bubbling and brown.

After leaving these to cool for a few minutes we tested them.  I knew which was which as I had put a ring of foil around the handle of the dish that had the pre-cooked lasagna.

Tolerant taster did not know which was which.  He like both pretty much the same.  I thought the textures of both were good.  The sheets of pasta had stayed distinctive and were smooth and yielding to the teeth.  In the past I have found gf pasta mushes into the layers of sauce in a disappointing way.


I found that the lasagna made from the pasta that had not been pre-cooked tasted of raw tapioca flour.  I found it rather unpleasant and quite dominating, even though the sauce was a highly flavoured one with chili.  Even with a repeat test with a specific request to pay attention to the taste Tolerant Taster didn't notice this, so I am clearly more sensitive to the flavour.
I will make this again but I will pre-cook the lasagna.  It may be that with longer cooking the flavour of the non-precooked lasagna would change, but I wouldn't want to be risking over-cooking the sauces just to be sure.

I haven't tested how this responds to being chilled and reheated and frozen and reheated - the samples I made today were so small that there isn't really enough left over to do this.  However, I am confident that this lasagna recipe would be happily eaten by people who eat wheat all the time.

I also need to test whether this pasta can be dried and used later, or frozen after pre-cooking in sheets for future use.  I always like to find out if foods can be converted from 'make-from'scratch' to 'convenience' foods.
Posted by Lois Parker at 15:47