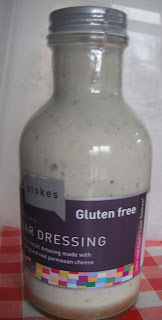 I bought some salad dressing by Stokes the other day.  It says gluten free in big clear type on the front.  It is part of their Go Free range which says both gluten free and the RSPCA Freedom Food on the label.  I always like to encourage companies that are so considerate in their labelling.  However, it also contains barley malt vinegar, and I am wary of anything derived from wheat, rye, barley or oats.  I wrote to the company to check the status of these foods, and received a letter back the next working day.  I have told them I would blog this response, so have included the whole text.
I haven't tried it yet, and tend to avoid things which might even have the tiniest amount of gluten in (I don't eat things which say 'made in an environment which also handles wheat' for example), but as a salad dressing for Tolerant Taster who switched from his favorite Cardini's Caesar Salad dressing which does contain wheat to help avoid risk of cross-contamination it is worth trying.
My understanding of vinegars is that the distillation process removes the gluten, so highly processed vinegar would be fine.  Artisan non-distilled vinegars would not be gluten free if derived from gluten- bearing sources.
also a link to a conversation about gluten in vinegar and the tricky issue of malt vinegar  http://ibstreatmentcenter.blogspot.com/2008/12/gluten-in-vinegar.html
and another: http://noglutennoproblem.blogspot.com/2010/04/rethinking-malt-vinegar.html
http://www.coeliac.org.uk/gluten-free-diet-lifestyle/gluten-free-diet-faqs
Reply from Stokes (they are Essfoods on the Internet)
Gluten Free
The products manufactured by Essfoods are gluten free.
Food labelling legislation makes it clear that where cereals containing or are derived from gluten are present in a product, then they have to be labelled as so.
The definition of ‘Gluten Free’ is defined by a governing body called Codex Alimentarius.  They have stated that ‘gluten free’ means that the total nitrogen content of gluten-containing cereal grains used in the product does not exceed 0.05g per 100g of these grains on a dry matter basis.  It is this definition that the food industry works to.
Therefore, a product can contain a gluten cereal, so long as it doesn’t exceed 0.05g per 100g of gluten and still be labelled as ‘Gluten Free’and this is the situation that you will find on the labelling of some of Essfoods products.
For example Malt Vinegar is produced from barley, which is why food labels have to clearly state this.  However, although malt vinegar is made from barley, it does not contain gluten.  It is recognised by The Coeliac Society as safe for coeliacs to consume.  Any gluten in the malted barley is removed by the vinegar manufacturing process (double fermentation) and is not present in the vinegar.  To confirm this, the vinegar industry has tested for the presence of gluten in malt vinegar and have not been able to detect it.  This is why our label also states ‘Gluten Free’
Where gluten derived ingredients are declared on our labels, we have statements from all of our ingredient suppliers stating that that level of gluten present in the ingredients falls within the Codex Alimentarius definition.
Essfoods products containing gluten derived ingredients but within the 0.05g per 100g of gluten limit:
French Dressing Coronation Sauce
Balsamico Dressing Real Brown Sauce
Caesar Dressing Suffolk Pickle
Tartare Sauce Real Ale Chutney
Cocktail Sauce Bengal Chutney
Balsamic Sauce Spiced Apricot Chutney
BBQ Sauce French Bean Relish
Whilst we understand that legislation makes this situation confusing, we don’t want to rule a coeliac out from eating our products, when actually we have been advised that they would be safe to do so.
Posted by Lois Parker at 12:15