I haven't been blogging as the grandchildren have been to stay. Added to that an enthusiastic child, a dog and a stick has meant I couldn't talk or eat  for a couple days.  Today we finally got to the dentist, though it took three hours ( Monday couldn't get out of drive as traffic stuck in snow...are we really the only people  in England with snow chains?).

Although it is only eleven am we are certainly ready for lunch, and TGIFriday is at the end of the road the dentist is on.

They open at eleven.  They have an entire menu of gluten and/or lactose free food.  I discover I have forgotten how to choose, being so used to just having to eat whatever the restaurant can manage, which on several occasions has been nothing at all.  They also say on the menu to let them know what your allergy/intolerance is so that they can do their best to avoid cross-contamination. 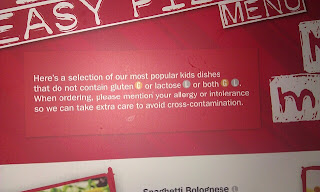 The chips are on the gf menu, but the onion rings are not.  I asked if they were cooked in the same fat.  The waitress said it was fresh oil so would be fine for me but she would also check.  A  couple of minutes later she came back to say that the chips were cooked in a separate fryer.

so far the staff were very helpful.  I have a straw to drink my coffee with ( a black one which matches my outfit).  The food arrived very promptly.

Chips were crisp but very salty, beefburger adequate. Ketchup and mustard brought in jars so I could read the ingredients.  Staff very attentive but not intrusive.  Definitely a good place to come with a mixed group of people and especially kids.  Don't know yet if I will get sick, but full marks so far.

We asked for the desert menu and the waitress remembered to bring the gf menu without being prompted.  Only one desert, a giant icecream and popcorn confection sold as being for two but more appropriate for three or four.  A bit unimaginative and rather restrictive if the only gluten free desert is meant for two.  Also, the menu covers lactose intolerance, and there is no desert listed for them.

However, I would definitely come here again, especially if I had a group or children in tow.
Posted by Lois Parker at 11:57