I ate last week at the Cafe Rouge in Worcester UK. http://www.caferouge.co.uk/menu/gluten-free-/17/
You have to put 'cafe Rouge' and 'gluten' into the search engine, as if you get onto their main website it doesn't seem possible to find the note on gluten free foods.  The tab on 'accessibility' is their bumph about how their website meets industry standards on design.

I noticed on a gf blog/tweet (don't remember which one, sorry) that they were listing their gluten-free foods, and after lots of restaurant experiences where people say things like "I don't know what is in the food" or "we can't give you anything, not even the green salad" this had to be rewarded and checked out.

It was also slightly strange to eat at Cafe Rouge as we hadn't eaten at one since we tried out the first one in Birmingham over a decade ago.  The service was slow, the waiters were rude and the food was lousy, and we had never been back.  I discovered I could print off a voucher for a reduced price meal on the website, which made the process even more inviting.

Worcester was full of shoppers - the Christmas market was open and hot chestnuts and mulled wine were available in the street along with crafts and myriads of other present options.  The restaurant was getting full, and soon after we arrived people were being turned away.  It was, of course, a Friday, and my voucher only worked Monday to Thursday, but we ate anyway.

I asked the waitress what was suitable.  She listed some items off the menu, though interestingly she left many of the items that the web page had listed as gluten-free. I asked about the chips (I haven't had chips in a restaurant for nearly three years now).  She went to check, and came back saying they were OK.  She didn't seem to understand my point about being fried in the same fat as breaded things...so I didn't have chips but I did put one of Tolerant Taster's chips in my bag and came home and tested it

I ordered Confit de Canard with thyme jus, French beans and duaphinoise potatoes.  The service was excruciatingly slow, and if we hadn't been on a research mission we might have got up and left - it was just as well I had paid for three hours of parking.  However, when the food came it was very delicious.  I had meant to take a photograph of it before I ate it but I forgot. 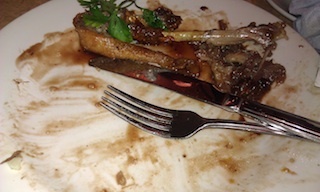 As I wanted to know more about the chips I tested one when I got home with the imutest kit (http://blissglutenfree.blogspot.com/2010/10/is-it-really-gluten-free.html) http://www.imutest.com.

I mashed up the chip with care - I didn't know if it was hazardous or not so treated it as if it was.  A crisply fried potato chip is very hard to mush up so I hope I did enough to allow any gluten to be extracted.  I then put it in the test kit and left it sitting in hot water - they recommend this for hard to extract foods.  The test came back negative for gluten.  As this could be that they just hadn't used that batch of fat for any gluten-bearing foods before they fried these chips I have also written a note to the company.  If they reply (and I find companies often don't) I'll post the results.

I didn't get sick at all, so, given how busy they were, they have to be given a gold star.  I did wipe the table and chairs and the cutlery myself with the wetwipes I use all the time, and I made sure I didn't pick up any food with my fingers (green beans can be tempting to nibble this way), but I will use the restaurant again - unless I am in a hurry.

Crispy duck confit with a thyme jus, French beans and creamy dauphinoise potatoes
Note to Cafe Rouge
Hi, I am pleased to be able to say I ate in your restaurant and didnt get ill - I am extremely gluten intolerant.  However, I am confused about the chips.  The waitress said they would be ok, and indeed I took one home and tested it with my gluten kit and it came out ok, but she did say they were cooked in the same fat as your deep-fried breaded cheese.  Could you let me know whether the chips are fried in fat that has breaded/gluten-bearing items fried in it too or do you have separate fryers.  Thanks.