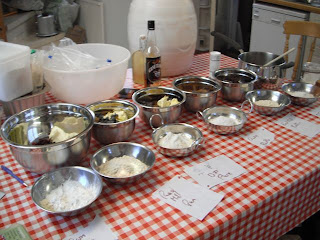 Original recipe calls for butter and self-raising flour. I have had a look at the recipe and decided to make six different versions for comparison.

I was going to test Doves Farm, my own mix and chestnut puree. I drove to a large supermarket thinking they would be bound to have chestnut puree seeing as they had converted the entire store to Christmas shopping. Couldn't find it, staff couldn’t find it, computer at customer services said there were 19 tins but it didn’t know where they would be. I gave up. Instead I tried a flour I was given recently called Bob’s Red Mill all purpose baking flour. I have seen it in lots of US recipes. A UK supplier has started stocking it and sent me some bags to test (lavidafood.com). I was tempted to try grated sweet potato, as that has worked well in recipes before, but I decided six recipes at once was quite sufficient.

I divided the full recipe into three as there were three eggs. Using double the ingredients gave me the six cakes.

I also used raisins instead of current as I don’t have currents. I used cranberries and blueberries instead of sour cherries and mixed peel. Peel always has sulphites in it I and I try to avoid these. I had meant to put some citrus zest in to balance the flavour but decided not to as I ran out of energy. Once I know what flour and fat mix works I can worry about tweaking the flavour if needed.

25ml rum (it asked for brandy but I had rum available)

160g raisins (should have been half currants)

Place first group of ingredients in saucepan and heat gently until chocolate and fat have melted. 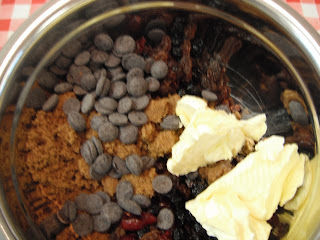 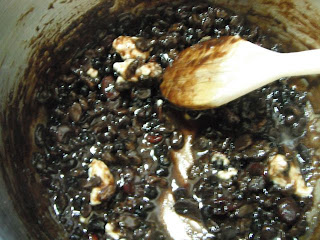 Sift / whisk third group of ingredients together and stir into mix. 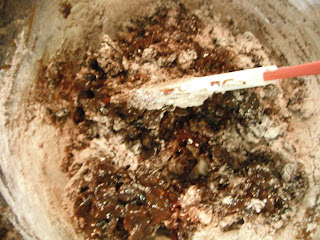 Place in greased and lined tin and bake. Original recipe calls for 150C /130C fan / gas2 for about 1.5 hrs. I set my oven to 35 minutes for the first check as I have small cakes and the adjustable tins which cook more speedily. 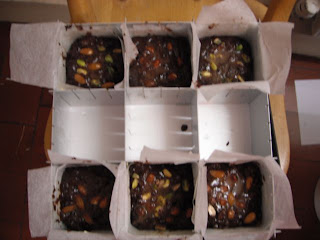 In order to tell which cake was which when finished I put varying types of nuts on the top of the batter and, here is the important bit, made a note of which was which.

As I was using a Silverwood Multisize Foldaway cake pan lining it was a bit awkward. I found that if I cut nine strips of non-stick baking parchment the width of the tin I could place one each way into the tin with the edges sticking up. I then took another piece the same size, greased it, wrapped it around my hand, and putting my hand into the small cake tin, let it spring open into place. 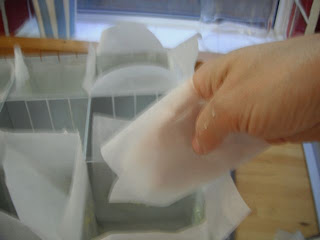 They are in the oven, not quite done at 35minutes. Will post results of taste tests later this week.
Posted by Lois Parker at 17:13