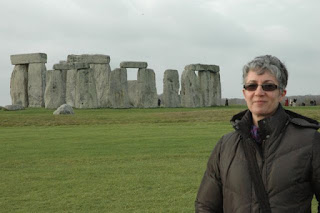 Today is my birthday...I am fifty.  It seemed appropriate to do something special so have finally been to see Stonehenge.  In the National Trust guide it said 'eat at award winning vegetarian and gluten-free restaurant at nearby Avebury’, or words to that effect.  Minor problem that the two are forty five minutes drive apart, but Avebury has an astonishing number of giant rocks scattered over a huge area.
The restaurant is really a small cafe, and there wasn't much choice, but the three bean stew was delicious and spicy, and was served with gratin potatoes and roast winter veg.  Portion sizes were based on the assumption we had been tramping over fields for hours rather than strolling in from the carpark. 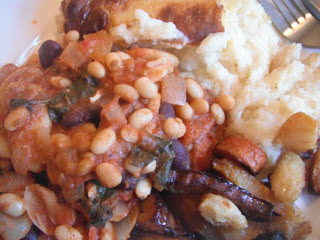 I did find a grubby spoon in the cutlery tray so hope I don't get ill from cross-contamination.  Only time will tell.
This would have been my first posting from a cafe, on my new smart phone - testing the system. However, there was no signal so I couldn’t access blogger, so wrote this in Word, and then realized I had taken the photograph with my other camera.  Never mind, learned several new tricks.


Note added next day:
Pleased to report that, whilst getting a bit of colic from the dairy, no evidence of any gluten contamination.  Since I am extremely sensitive I declare this cafe safe to eat in!
Posted by Lois Parker at 18:34